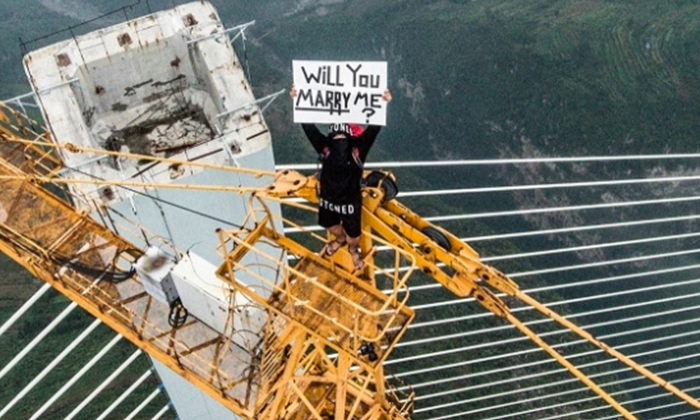 Love can drive people to do crazy things.

For 28-year-old Malaysian photographer  Keow Wee Loong, that meant scaling the world’s highest bridge (1,853 foot) to shoot a proposal video to his girlfriend, 24-year-old Marta Sibielak -- without any safety equipment.

The two had met by a chance encounter while Keow was travelling in Japan, reports an article on World of Buzz.

Keow had wandered into a shop to use the WiFi  and in the process, chatted up the Polish girl manning the counter, also known as his future girlfriend.

“Seeing a western woman working in a mini mart in Japan was a little jarring.

“I was simply lost and wanted to use the WiFi in the store but ended up talking to her.

“She spoke to me in Japanese, assuming that I was Japanese, but I replied in English and she seemed excited to be able to speak to a foreigner.”

Although his trip only lasted a few days, during which he had visited the abandoned Fukushima radioactive zone, he told her about how he had accidentally lost his wallet and Marta decided to treat him to a meal.

He then asked for her number and for the remaining four days of his trip, Keow would visit the convenience store every night to send her home.

She also helped nursed Keow back to health when he was reportedly down with a fever after returning from the radioactive site in Fukushima.

The pair dated for six months before Keow decided to propose to her.

However, when his initial plans to propose to her in a cinema was foiled, he decided to formulate another plan; a trip to Bali.

He popped the big question on Facebook, along with his proposal image, and Martha agreed.

The two are currently in a long-distance relationship but plan to settle down together in Malaysia at the end of 2017.