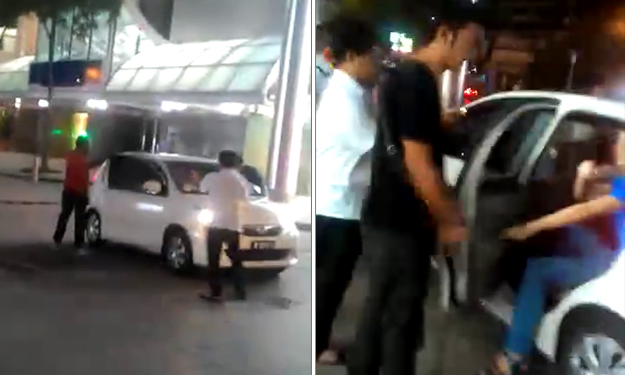 Cabbies in Malaysia were seen attacking Uber and GrabCar drivers at the Kuala Lumpur City Centre in Malaysia.

In the video, a man is seen saying, "That's the story if you drive a GrabCar or Uber", as a few cabbies proceed to threaten the Uber and GrabCar driver by stopping the vehicle.

Uber and GrabCar are both transportation network companies, which work via mobile applications.

Unlike regular taxis that you flag down, they allow customers to submit a trip request, which is then routed to the drivers, who use their own cars for the pickups.

As the cabbies find another GrabCar vehicle, one of them is overheard telling the driver: "All that are taxi drivers, I also want to eat, I pay everyday."

They then proceed to force the customer to get down from the car.

At the end of the video, the man says: "With that, don't you drive GrabCar or Uber, there are taxi drivers out there."

In the post by Elton Poh, dated Oct 9, he said:

"Is this the kind of Malaysian we want to represent our country when tourists and expats needs transportation around?

"I can vouch for every single person that watches this video, and they'd agree whole heartedly that their actions ain't acceptable at all."