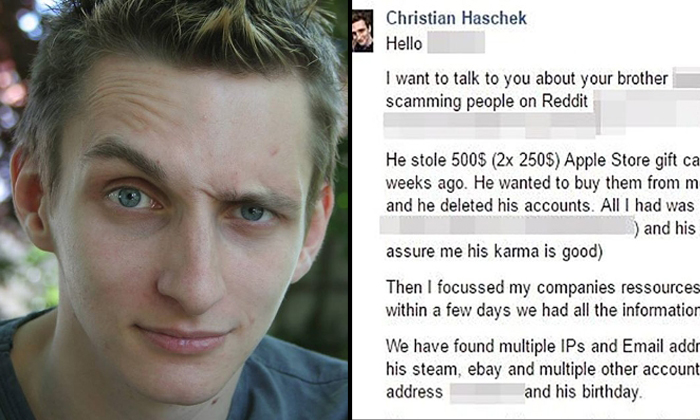 Scamming someone is never a good idea -- especially when your buyer is a cyber security expert.

Shortly after Reddit user Christian Haschek posted a thread to sell a $500 Apple store gift card, he found a buyer who insisted to have the card mailed to him before he would pay up.

Haschek agreed as he had been trying to get rid of the card for the past four years.

But once the cards were marked as delivered, the scammer started deleting all of the Reddit accounts he had used to contact Haschek instead of paying up.

Well, the scammer should have known better than to mess with Haschek, who according to Distractify, is the owner of a cyber security research company.

Haschek tracked down the scammer's Facebook account in no time, with just a quick search of his username.

He then messaged the culprit's brother and mother, and within ten minutes, Haschek received a desperate message from the guy himself.

Haschek agreed to not contact the cops if the scammer sold the cards and transferred him the money, which the latter did.

He also warned the scammer that "if I ever catch him scamming people, I'd drop everything I have about him."

You can check how the conversation went in the gallery above, which is pretty satisfying to read.