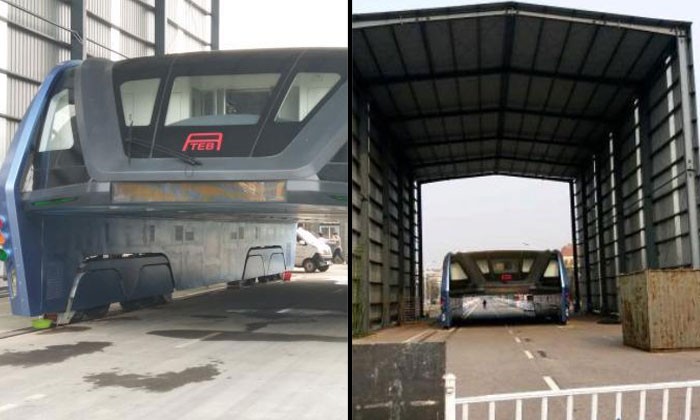 The world was in awe at China's futuristic 'straddling bus'. Originally designed to help solve urban traffic jams, but a local journalist was shocked to see that it now sits rusting by the side of the road.

Even the two elderly security guards who were tasked to look after it reluctantly admit that they've been forgotten about as well, saying that they could not contact the managers from the company.

Shortly after it's first 'test run' on a tiny 300-meter-long strip of road in Qinhuangdao, the 'straddling bus' was labelled a 'big fat scam' by the media.

Investors quickly asked for their money back.

TEB promised that it would be testing again, but no such plans have come to be.

Despite its futuristic design, the bus is riddled with design flaws.

The 'straddling bus' stands at 2.1 meters, yet China vehicles of up to 4.2 meters in height on its roads. That could have spelt disaster. in addition the 22 meter long bus may have been just too heavy for the roads, which have been known for sinkholes in the past.

Now in a twist of fate, instead of helping reduce traffic, the 'straddling bus' now creates a even bigger problem as it  continues to block three lanes of traffic, which is a source of huge irritation with residence.

"No one has done anything with it in over two months. It still hasn't been dismantled," said local resident Chen Peng. "Give us back our road so we can pass through."

But no such luck for residents.

TEB has announced that it has extended its lease for another year. it was originally planned to expire in August.

Just ahead of its time or a complete scam? you decide.