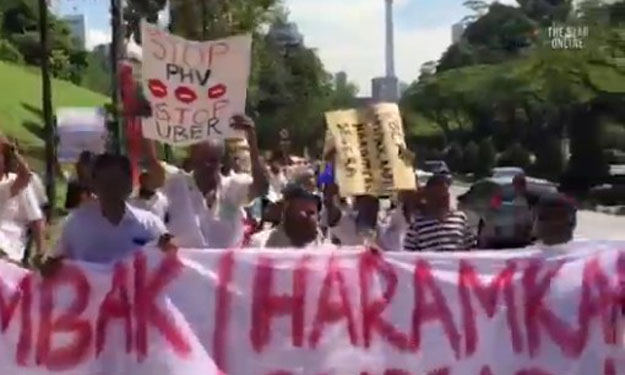 Taxi drivers are threatening to block many of Malaysia's main roads if the Government does not ban Uber and GrabCar.

According to The Star, the threat came after hundreds of them went to the Parliament to protest against the ridesharing apps, which they claim were taking away their customers.

“If there is no response or the right attention from the Government, we will have another large demonstration on several main roads," said protest organizer Kamarudin Mohd Hussain.

He also implied that the roads around Bukit Bintang or Kuala Lumpur City Centre (KLCC) could be closed off by their taxis.

The protesters had asked for the leadership of the Land Public Transport Commission (SPAD) to be 'reshuffled' since they had not banned Uber and Grabcar.

The group, which is led by Klang Valley Taxi Drivers Action Committee, massed at Padang Merbok at about 10am before marching to the parliament an hour later.

They were stopped by police from going up to the Parliament gates but were met by Opposition politicians who came to give the drivers their support.

In Oct 2012, about 200 taxi drivers had blocked Jalan Bukit Bintang with their cars to protest a free-to-ride bus service launched then, causing heavy traffic jams in the city.

“We cannot do it in the same way that they do because we are the regulators.

“Obviously, not everything that we do, they (the drivers) are satisfied,” he said.

The SPAD had indicated that they were not going for a total ban and were going to regulate Uber and Grabcar instead.