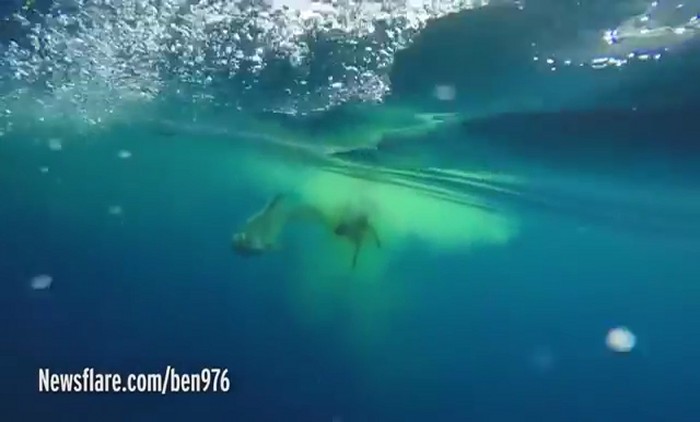 You'll think you've seen it all, till you see a shark savagely attack a cow in the middle of the Indian Ocean.

In a video uploaded onto News Earth's YouTube channel, a group of people on a boat notice some movement in the water.

The friends who were sailing off the French island of Mayotte soon realised that it was actually a huge tiger shark taking a bite out of a horned zebu cow.

The footage was taken 500 metres away from the nearest beach.

It is bizarre how the cow got there in the first place but it is speculated that it might have fallen off a boat.

Check out the encounter in the video below.

Warning: The video is of a graphic nature and may disturb some viewers.

In the unlikely event that you get attacked by a shark, here's what you're supposed to do to survive, according to wikiHow:

1. Don't take your eyes off the shark. Make sure you know where the shark is, even as you're planning your escape.

2.  Stay calm and don't make sudden movements. You can't outswim a shark, so don't try to.
Move slowly towards the shore or a boat and don't thrash your arms or kick or splash while you swim.
Don't turn your back on the shark as you move. Always keep the shark in view.

3.  Get into a defensive position. Try to minimise the shark's possible angles of attack. If you're in shallow enough water, keep your feet on the ground. Slowly back up against a reef, piling, or rock outcropping - any solid obstruction – so that the shark can't circle around behind you.
If you're diving near the shore, you may need to descend to find cover. Look for a reef or rock on the bottom of the ocean.
In open water, get back-to-back with another swimmer or diver so that you can see, and defend against, an attack from any direction.

1. Hit the shark in the face and gills. These are really the only vulnerable areas on a shark.
A sharp object is a good way to inflict enough pain to scare away the shark. Aim for the head, specifically the eyes or the gills.
If you don't have a weapon, use a camera or a rock to ward off the shark.
If you have nothing around you, use your own body. Aim for the shark's eyes, gills, or snout (end of its nose). Fight with your fists, elbows, knees, and feet.

2. Keep fighting if the shark persists. Hit the eyes and gills repeatedly with hard, sharp jabs. You can also claw at the eyes and the gills.

Escape and Get Help

1. Get out of the water. Sharks may leave temporarily and then come back to continue the attack.
If a boat is nearby, call out calmly, but loudly, for them to come to you. But stay as still as possible while waiting for help.
If you are near shore, swim quickly, but smoothly. Thrashing will attract the shark's attention again and disperse your blood, which could draw more sharks. Do the smooth reverse breast stroke, which requires less splashing than other strokes.

2.  Get medical attention. If you've been bitten, get treatment as soon as possible. Massive blood loss could occur, depending on where you've been bitten, so immediately take appropriate steps to stop the bleeding.
Remain calm until you get medical care so your blood does not pump faster through your body.