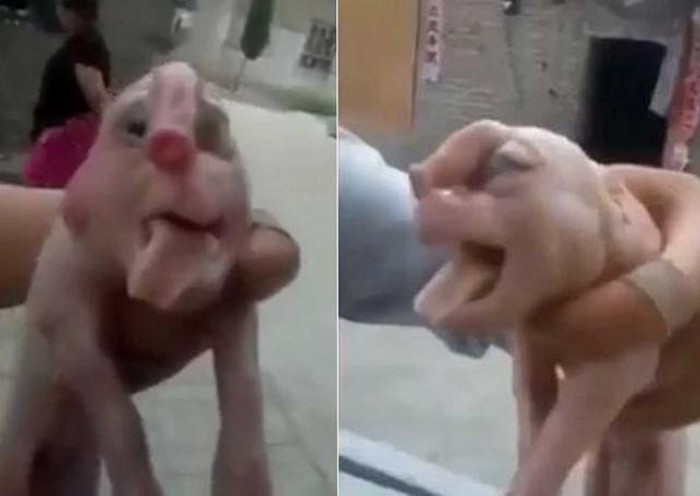 A piglet with an unusually long snout, possibly resembling an elephant's trunk or a part of a man's anatomy - depending how you see it - has been born into this world.

It is not every day that you get a strange-looking baby pig with a droopy snout, dangling tongue and protruding lower jaw. Footage of this abnormal piglet has been making its rounds since it was posted on Chinese social media and shared widely online.

The alien appearance of this piglet has left many wondering what had happened and how it became mutated.

In the video, the animal can be seen gasping for air, looking visibly distressed as it was being held up.

While it remains unclear when or where the video originated, many are speculating online that the deformities are caused by environmental pollution. Other causes for mutation could include nutritional issues, poisoning, abnormal metabolisms or hereditary defects, reported news.com.au.

"Pigs got deformation, while human beings got cancer," said a user of the China's My Drivers webpage.

Another online user said the animal is "living proof of reincarnation".

This is not the first time photos of 'mutant pigs' have surfaced online.

Earlier this year, another piglet was born with 'testicles' instead of eyes. A photo posted on Imgur shows two bulges where its eyes are supposed to be. However, the rest of the pig's face appeared normal, though its body was rather small.

Last year, a farmer from Nanning, China claimed to have received a number of cash offers for his deformed creature that was born in a litter of 19. However, the animal died after it was rejected by its mother and refused to be bottle-fed, reported the Mirror.

Zoologists have said that severely deformed cubs don't have a long lifespan - they typically die a few days after they are born.

We hope the latest 'mutant piglet' has a good few days on earth, if you're still alive. And if you're not, R.I.P.

Related Stories
Disturbing photos that prove the Earth is one really freaky place
Woman in China ‘walks’ man on leash like a dog -- in full view of passers-by
More About:
bizarre
unusual
weird