FB user’s claim of harassment by officers and being 'locked for 8 hours' is false: HSA 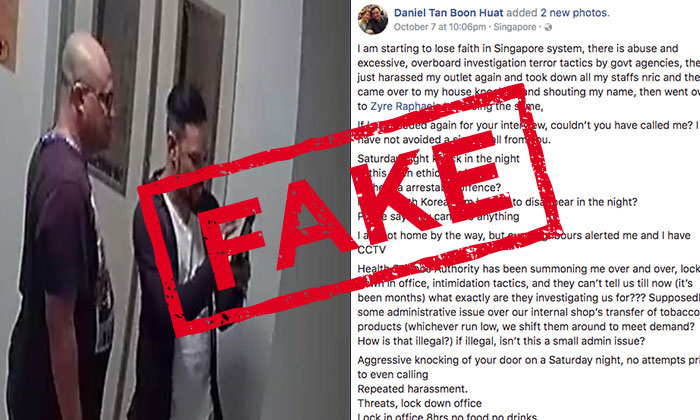 A Facebook user, Daniel Tan Boon Huat uploaded a post on his Facebook on Oct 7, in which he was alleged to have been subjected to ‘overboard investigation terror tactics’ and harassment from Health Sciences Authority (HSA) officers.

In his post, Daniel launched into a trade, complaining that the officers had ‘harassed’ his outlet and took down the IC details of all his staff, before heading to his house to look for him.

“I am starting to lose faith in Singapore system.

“There is abuse and excessive, overboard investigation terror tactics by govt agencies.

“They just harassed my outlet again and took down all my staffs NRIC.

“Then they came over to my house knocking and shouting my name, before (heading) over to Zyre Raphaela Loh’s (house) doing the same,

“If I am needed again for your interview, couldn’t you have called me? I have not avoided a single call from you.

“Saturday night knock in the night.

“Is this even ethical or legal?

“Is there an offence which warrants an arrest?

“Is this North Korea?

“Am I going to disappear in the night?

“Police say they can’t do anything.

“I am not home by the way, but our neighbours alerted me and I have CCTV.

“Health Science Authority has been summoning me over and over, lock me in the office, use intimidation tactics, and they can’t tell us till now (it’s been months) what exactly are they investigating us for?

“Supposedly some administrative issue over our internal shop’s transfer of tobacco products (whichever run low, we shift them around to meet demand? How is that illegal?)

“Isn’t this a small admin issue?

“Aggressive knocking of your door on a Saturday night, no attempts prior to even calling.

“Threats to lock down (my) office.

“Lock in office 8hrs no food no drinks.”

In response to the allegations, HSA said in an official statement that the accusations are completely false.

It said that the accusations had been made by a shop owner whose tobacco retail licence was suspended as his establishment was found selling tobacco to an underage minor.

The owner and relevant parties are currently assisting the HSA with investigations with regard to the Tobacco Control of Advertisements and Sale Act (TCASA).

HSA said that it had informed the owner to assist in investigations and asked him to attend an interview at HSA’s office on Sept 29, 2017.

During the interview, the owner was also provided with drinks contrary to his claims.

Furthermore, footage from CCTV showed that he had left the unlocked interview room several times to ‘attend to personal matters’.

On Oct 7 evening and Oct 8 morning, HSA’s officers visited the home of the relevant parties to serve them a notice for a fresh round of interview in light of new evidence uncovered.

Officers performed their duties professionally, knocking on the owner’s door briefly and left when no one was home.

HSA also took the chance to assure members of the public that their authorised officers will continue to dutifully conduct themselves professionally.

Said the HSA in its statement:

"The Health Sciences Authority (HSA) is aware of an online post making allegations about the actions of HSA’s investigation officers.

"We wish to clarify that the accusations are false.  HSA officers had carried their duties professionally, without any harassment or threats made as alleged.

"The accusations were made by an individual whose tobacco retail licence was suspended because his shop was found selling tobacco to an underage minor.

"This individual and relevant parties are currently assisting HSA in investigations with regard to further violations to the Tobacco Control of Advertisements and Sale Act (TCASA).

"The individual was informed to assist in investigations and asked to attend an interview at HSA’s office on 29 September 2017. The HSA officer had provided the individual with drinks during his interview.

"On the evening of 7 October 2017 and the morning of 8 October 2017, HSA authorised officers had visited the homes of the relevant parties to serve them a notice to attend another interview, due to new evidence uncovered during the ongoing investigations.

"HSA’s investigation officers had performed their duties professionally by knocking on the door briefly and left when no one was home.

"HSA would like to assure members of the public that our authorised officers will continue to dutifully conduct themselves professionally and as empowered by the law.

"We take a serious view on persons who make unfounded accusations against our authorised officers."