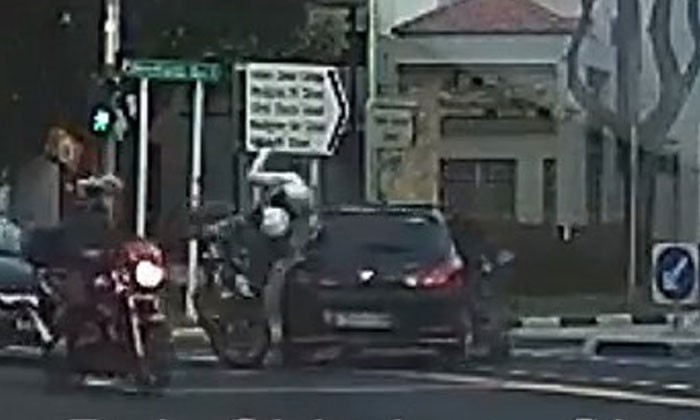 A Peugeot driver hit a motorcyclist and his pillion after beating a red light at a road junction.

According to the caption of a video of what happened posted on Beh Chia Lor - Singapore Road, the incident took place on Sep 5 at around 6.45pm.

The video first shows drivers making right turns at the road junction as the green arrow was showing.

Moments after the video starts, the arrow turned red.

The Peugeot driver however, beat the red light, and turned the car just as vehicles on the opposite side began to accelerate.

While making the turn, the Peugeot driver hit the motorcyclist and his pillion who were travelling straight after the lights changed in their favour.

The motorcyclist's helmet became dislodged due to the impact. He managed to steady himself, and stood on the road thereafter.

The pillion however, flipped and fell onto the road following the collision.

The Peugeot driver then continued accelerating. It is unclear if he or she alighted thereafter to check on the two individuals.