Did you catch this? Sky turns a gorgeous shade of crimson in Singapore 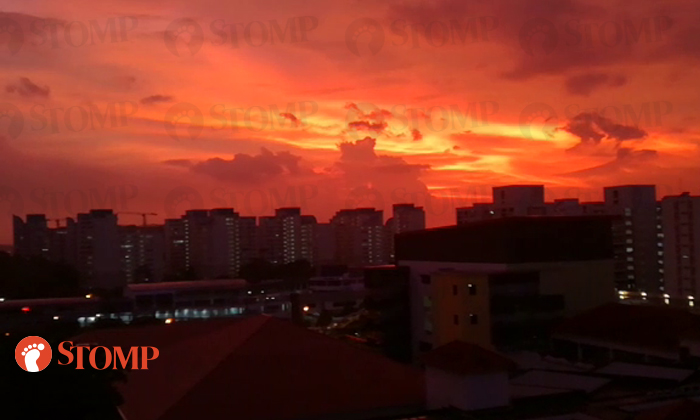 Stomper Adam saw the sky turn a beautiful shade of crimson at Pasir Ris at around 7pm.

Upon noticing the unusually stunning sky, he promptly snapped a picture and also took a short video of it on his mobile phone.

The Stomper did not know whether the sight, which lasted around 15 minutes, was visible throughout Singapore, but said it could be prominently seen in the east.

Meanwhile, Stomper Raven was at Orchard Road at 7.14pm with his friend when he noticed the sky after heavy rain.

Said the Stomper: "I happened to look out of the window by chance and saw this beautiful red sky.

"It was gone in a short period of time after the photo was taken.

"Anyone else got to see this exciting moment?"

Related Stories
Sunset at Woodlands is truly a sight to behold
Have you seen a sunset as beautiful as this in S'pore?
After the rain comes gorgeous pink and purple skies over Singapore
More About:
sky
nature