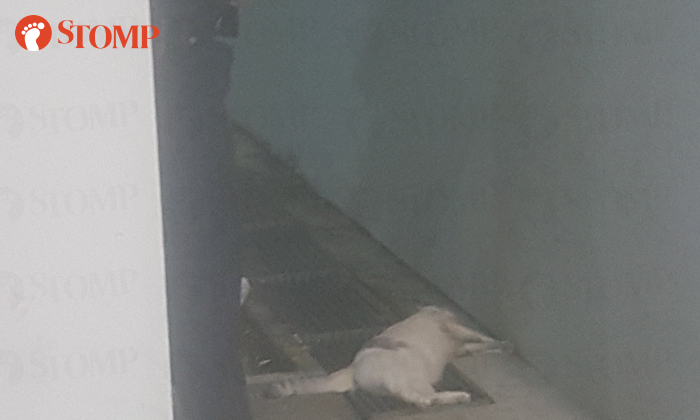 Stomper Khairi, who came across the dead cat, said that there had been two dead cats found in the area previously.

"This is the third time that I am aware of. The first two were kittens and a black Persian cat. Now this poor white and grey british short hair has been thrown down," said Khairi.

Recounting his experience, he told Stomp, "I was at the sixth floor when I heard some commotion. I went down and one of the neighbours told me that someone threw a cat down the block."

The dead cat was found lying in the drainage area near the block, with blood near its mouth. Stomp cannot be established whether the cat was thrown down the block or not.

Photos that the Stomper sent in also shows police officers at the scene.

Khairi, who is also a cat owner, hopes that the culprit would be caught soon.

In a statement, the Agri-Food & Veterinary Authority told Stomp that they are investigating the case.

AVA, added, "Members of the public who have information on this case (e.g. photographic or video evidence, witnesses, etc) can contact AVA at 1800-476-1600. All information provided will be kept in strict confidence."