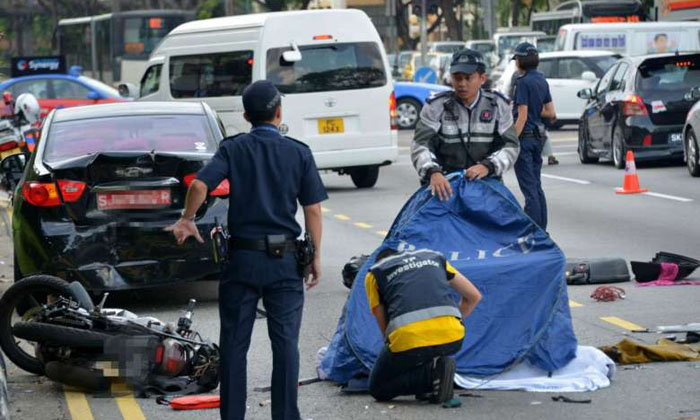 A man who caused the deaths of a couple on a motorcycle while driving his friend's minibus was jailed for eight weeks and banned from driving for five years on Thursday (June 16).

He had failed to keep a proper lookout, thus causing the minibus to hit the motorcycle, which in turn rammed into the back of a car, resulting in the couple being flung off the machine.

He pleaded guilty to the causing death charge and causing hurt to the front seat passenger of the Hyundai, Madam Zaharah Haji Mohamed Yasir, 41, who was hurt when she hit her chest onto the front dashboard of the car.

Deputy Public Prosecutor Sarah Ong said that Retnam met his friend, Mr Saravana Kumar Palaniyappan, 36, at Race Course Road that day. He told his friend that he needed to go to the Institute of Mental Health to visit his father and to Yishun to visit his sister.

He asked Mr Saravana, who owned an 11-seater minibus, if he could take him to those places but Mr Saravana said he could not as he was tired and busy.

At about 2.30pm, Retnam was driving along Yishun Avenue 2 towards Canberra Link when he failed to keep a proper lookout. The minibus hit the back of the delivery rider's motorcycle which then collided into the Hyundai in front of it.

The Hyundai surged forward and Madam Zaharah, who was belted up, hit her chest on the dashboard.

Mr Wong was pronounced dead at 3.15pm. His wife was taken to Khoo Teck Puat General Hospital where she died three days later.

Two other charges of driving the minibus without a vocational licence and insurance coverage were taken into consideration.

Retnam's lawyer S.S. Dhillon said in mitigation that his client, who now works as an attendant at a logistics company, has recurring nightmares and suffers from mental agony and emotional turmoil since the tragic traffic accident.

He said Retnam is deeply remorseful for having caused the deaths of two people and extends his deepest regret and sympathy to the family.