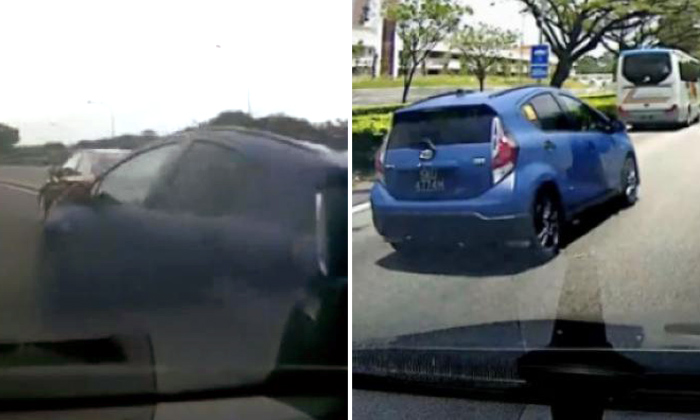 A 23-year-old male driver was arrested by the police for dangerous driving, a day after a report was lodged about his reckless driving.

The man was arrested on Jan 23, three days after a clip of him weaving dangerously through traffic on PIE in a blue Toyota Prius

According to a Facebook post on the Singapore Police Force page, a police report was lodged on January 22 and he was identified and arrested the next day.

The driver of the blue Toyota Prius, with licence plate SKU4774H, was also pictured driving to the Traffic Police Headquarters on Jan 23.

The video was posted on Beh Chia Lor - Singapore Road, and Stomp carried a report on that clip, highlighting the similarities it bore to a similar incident in October 2016.

Drivers should take this as an example as a warning of what would happen to them if they behaved recklessly on the roads.

With car-cams capturing more bad deeds on the roads, it will be nearly impossible for these errant drivers to escape from the law.

"Motorists are urged to drive safely and to abide strictly to traffic rules and regulations.

"For motorists who choose to endanger the safety of other road users, Traffic Police will not hesitate to take firm action against them."