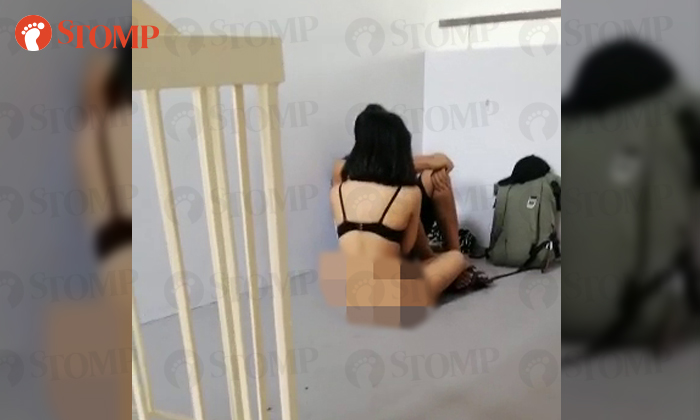 Anonymous, who lives in the area, told Stomp that it was at around 12pm when he came across the incident.

A video that Anonymous took shows the woman, who was clad in underwear, turning around to look at the Stomper. The man also appeared to be undressed.

Stomper Anonymous said: "I was climbing the stairs to exercise when I saw two people having sex at the staircase landing. It was on the ninth floor if I remember correctly.

"The girl was on top of the guy when I first saw them.

"I am sharing this as I didn't really like what I saw.

"It is my first time encountering something like this.

"I was quite scared actually, as the guy later chased after me and grabbed my arm. He tried to bring me to one corner for 'man talk'.

"I was not injured but he asked me to delete the video whether I filmed it for personal use.

"I managed to flee in the end. I think there was an old lady and a maid who saw him grabbing my arm on the fifth floor.

"I ran down the stairs when he let go of my arm and ran home afterwards.

"Is this illegal and considered public indecency under the Miscellaneous Offenses (Public Order and Nuisance) Act?"

Related Stories
Arrested: Man who had sex with woman outside Orchard Towers
Couple engages in sex acts by roadside in River Valley for 45 min, woman scolds Stomper who told them off
Couple strips and engages in sexual act at void deck of Yishun Block 666
More About:
PDA
inappropriate activity