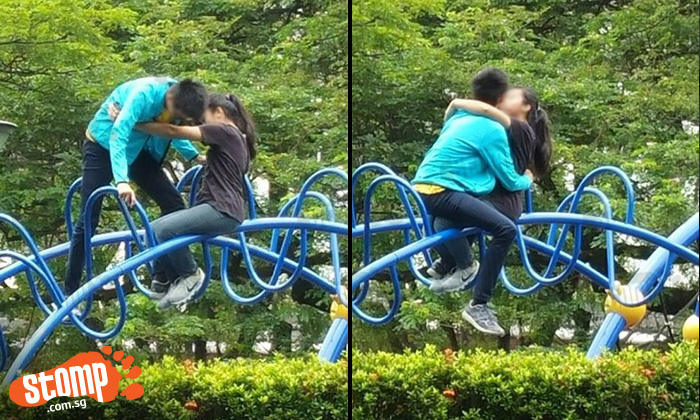 Stomper Chloe saw a couple take their public display of affection (PDA) to grand new heights at a playground near Block 934 next to Yishun Park at 1pm, literally.

The Stomper was passing by the area and saw the couple seated on top of the bow ladder.

The were hugging and making out, oblivious to the fact that they were out in public.

"Please get yourself a place or home," said Chloe.

"It is damn awful to act like this in front me and my family, especially kids," added the Stomper.

"When we were having our church party there, I was listening to a pastor talking when I turned around and saw them hugging.

"I zoomed in with my camera and saw that the guy was touching the girl's private parts and the girl was hugging him tightly.

"After about  15 minutes, they proceeded to the position of the girl squatting and the guy using his jacket to cover them.

"Wonder what they are doing. Whole duration takes about half an hour.

"Without spotting me taking pictures they were continuously doing their own stuff."