Cat found dead at Tampines St 83: Women saw man slam it on ground twice and use lighter to burn it 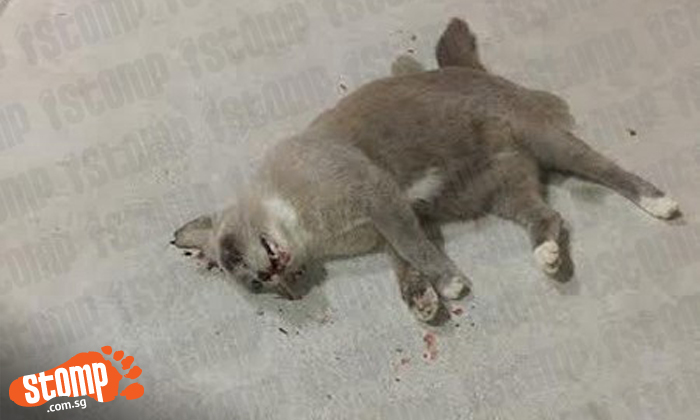 In yet another worrying case of what seems to be animal cruelty, a cat has been found dead at the foot of Block 884 Tampines Street 83.

Stomper Jaslynn and her mother happened to witness a guy slamming the grey Siamese cat to the ground on Wednesday (May 25) at about 1.55am.

Jaslynn described their harrowing encounter in a phone interview with Stomp:

"I suspect he threw the cat down from high level first, and then slammed it on the ground twice to make sure it was dead.

"He even took a lighter out to burn it to 'check' that it was dead."

"My mother heard a shriek from downstairs and went down to see what happened," Jaslynn said. "However, she did not find anything."

Her mother went back upstairs and that was when she heard yet another shriek of agony.

From their third-storey kitchen window, she could see a figure bending down with a lighter. There was a puddle of water on the ground.

"My mum was puzzled. She saw someone throw something to the ground twice. And she did not know why the man wanted to burn the ground or a pool of water.

"Then, she saw a tail. She shouted and rushed down without saying anything to me."

Jasslyn followed and they saw a man slam the cat to the ground. She described him to be in his 20s.

When they approached, he quickly walked away and pretended like nothing had happened.

While the spate of cat deaths previously reported was in the Yishun area, this is apparently not the first tragedy that has struck Tampines, according to the Stomper.

The Stomper's black cat Hitam went missing on May 23, and was later found dead with blood oozing out of its mouth at Block 885.

She had asked a cleaner if he had seen her missing cat, only to hear news from him that he had thrown away its carcass. He apparently "did not want trouble" and that the decomposition was "smelly".

Jasslyn's other cat, a grey Tabby named Wing Wing, was found with a dislocated leg on the morning of May 23.

At first, she had thought the cases might be accidents. However, after her most recent encounter, she realised otherwise.

The Stomper would like to advise residents to be alert and investigate the source of some strange sounds, like cat shrieks that do not sound like typical cat fights.

"They are like shrieks of pain, we should not ignore.

"People who feed cats regularly should also go and look for them if they go missing, and not assume they have run off."

She says that she has already contacted the Police and AVA about the cases, and they are currently investigating it.