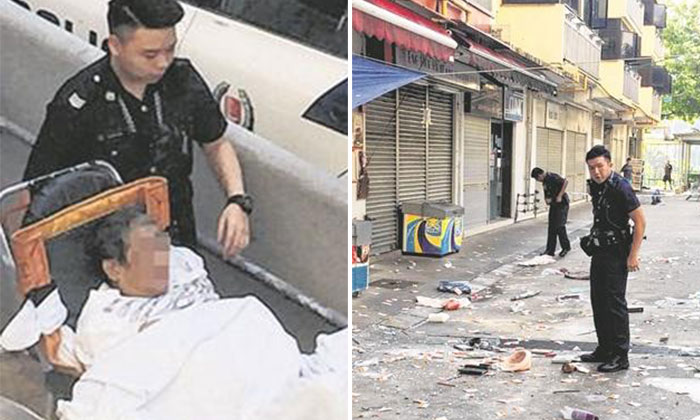 An 65-year-old man suspected to be mourning the recent passing of a good friend, threw umbrellas, glass objects and even an iPad tablet out of his 8th-storey flat in Jalan Kukoh, Tiong Bahru.

The incident happened at Block 2, Jalan Kukoh, yesterday (July 9) at around 7am, and the man has been arrested, reports Lianhe Wanbao via Lianhe Zaobao.

A 23-year-old witness told reporters that he had seen the suspect tossing items out from his window.

“The man kept shouting, and throwing things out of his apartment’s window.

“He threw clothes, hats, umbrellas, glass products and even an iPad.”

Among the items thrown was a metallic object suspected to be a chopper.

A resident who did not wish to disclose his identity said that the man had started shouting in the early morning.

“The authorities went to his apartment not long after and they had a standoff for about an hour before officers broke into the unit.

“The officers then came out of the unit with the suspect.

“He (the suspect) kept apologising to them.”

It is understood that the elderly man had injured a leg while throwing the items, and claimed that he had lost control due to the loss of his best friend.

A spokesman from the Singapore Civil Defence Force (SCDF) said that SCDF officers had broken into the suspect’s flat using hydraulic devices, and the elderly man was conveyed to a hospital for treatment.

The Police have confirmed the incident and said that the case is under investigation.