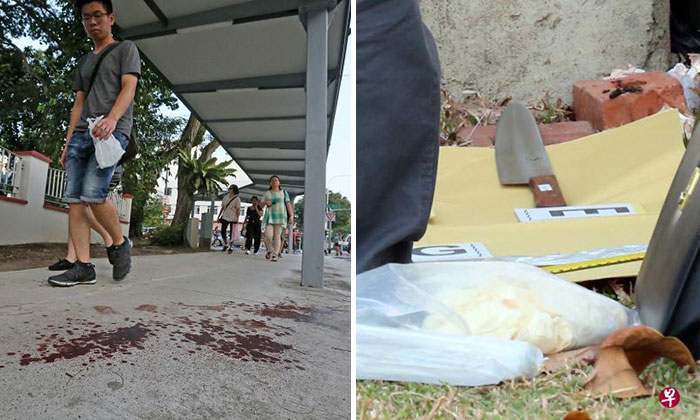 A 29-year-old man was injured after getting slashed by another man wielding a knife, at a junction of Aljunied Road and Sims Avenue on Wednesday (Aug 2) afternoon.

The 31-year-old suspect has since been arrested, and the police also found two knives at the scene, reports Shin Min Daily News via Lianhe Zaobao.

The victim bore slash wounds on his left arm after the attack, leaving behind a 5m-long blood trail along the sheltered walkway outside the Geylang Chinese Methodist Church.

In response to media queries, the police said they were alerted to the case at 2.34pm on the day of the incident, and arrested the suspect for voluntarily causing hurt by dangerous means.

Witnesses said that they saw the suspect brandishing a knife, while the two argued.

A witness told Shin Min Daily News that the victim’s clothes were soaked in blood, which dripped onto the ground.

“I couldn’t tell where the injury was, but he (the victim) was helped by a woman.

“Not long after, the police came.”

The victim was sent to Tan Tock Seng Hospital for treatment.

According to The Straits Times, the suspect’s 25-year-old fiancee, present during the incident, was also arrested for drug-related offences.