1 dead, 10 injured after structure on highway under construction near PIE collapses 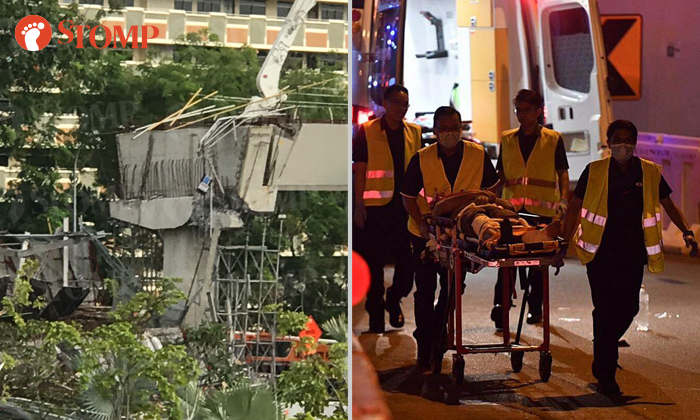 One worker was killed and ten others were injured after a structure on a highway under construction near the Pan-Island Expressway (PIE) exit to Tampines Expressway (TPE) collapsed at about 3.30am today (July 14).

Several Stompers, including Fauzi and Shafiel, alerted Stomp to the incident.

The Singapore Civil Defence Force (SCDF) said that it was alerted to the collapse of the structure at Upper Changi Road East, a slip road into PIE (Changi), at 3.35am today.

About 60 SCDF officers including members of the SCDF's Disaster Assistance and Rescue Team (DART) were involved in a search and rescue operation at the scene, deploying K9 dogs to help them as well.

Ten workers were conveyed to Changi General Hospital by SCDF ambulances and one worker was pronounced dead at the scene by paramedics.

The SCDF ended its search and rescue operations at about 6.45am and all the workers at the worksite were accounted for.

In a media statement, the Land Transport Authority (LTA) said that a section of the viaduct structure between two piers collapsed at the worksite where the new road viaduct from TPE (Changi) to PIE (Westbound) is being constructed.

According to LTA, the contractor, Or Kim Peow Contractors Pte Ltd, was carrying out works to cast the decking for the new viaduct adjacent to the slip road from Upper Changi Road East to PIE (Changi).

11 workers were working on top of the structure during the accident, and the worker who was killed is from the People’s Republic of China.

Among the 10 injured, seven are from Bangladesh and the other three from the People’s Republic of China.

LTA engineers, contractors and personnel worked with SCDF and Police to manage the situation.

The Ministry of Manpower (MOM) and LTA have also begun safety investigations into the cause of the accident.

In its statement, LTA said that preliminary investigations indicate that the corbels supporting the pre-cast beams had given way.

As a precautionary measure, LTA is checking all other work sites.

"We are saddened by the accident and will do whatever we can to assist the families during this difficult time.

"LTA officers have been assigned to help the injured workers and the families."