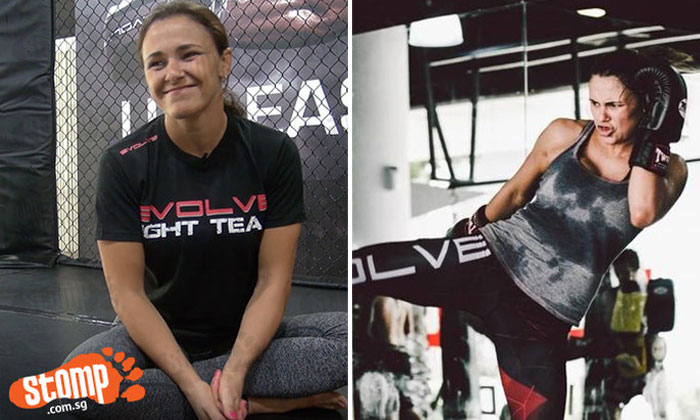 Though a confident and strong young lady today, Michelle remembers attending her very first Brazilian Jiu-Jitsu lesson back in Sao Paulo, Brazil, when she was a shy 17-year-old.

“When I first started training, I called one of my girlfriends to go with me because I was shy to go for the first class on my own,” said Michelle.

After training with her friend for about a month, Michelle grew more comfortable with the sport, and moved to another gym to start training competitively alone.

With martial arts being a highly male-dominated sport, Michelle had to get used to training with the opposite gender. Though she was intimidated at first, these trainings benefited her most.

“I feel when you train with a guy and then go for a competition with girls, you’ll definitely be more prepared since you’re used to using more strength with the guys,” explained Michelle.

Though martial arts has become more well-received by women of late, Michelle is aware that many of them still do not get the opportunity to train because their family members or loved ones are not comfortable with the high level of body contact involved.

“Many guys don’t allow their girlfriends or wives to train because they don’t understand that once you’re there on the mat, you don’t think about anything sexual or the sweat on your face -- you don’t have the time to care about these things.”

She feels that the mind changes when she puts on the Ghi and steps on the mat.

“You just want to learn how to escape, learn how to move, you want to get a submission -- your mind just changes a lot when on the mat," she explained.

While the thought of training with men can be rather intimidating because of their size and strength,

Michelle explained that females have their strong suits too.

“I think girls are more talented in techniques, because we don’t have a lot of strength,” she said.

With that being said, Michelle feels that the application of the various techniques is also important.

“Not everything works for men, we (women) can do a lot with just techniques. When you learn how to protect yourself, how to move from different angles, they won’t be able to attack.”

Michelle might already be a world famous female Brazilian Jiu-Jitsu fighter, but that doesn’t mean that the respect she gains from the mat never fails to keep her going.

"When you show that you are someone serious, people start to respect you. They don’t have to be afraid of you, but they have to respect you as a woman,” she explained.

She will be debuting at the ONE Championship cage later this year.

Currently an MMA instructor at Evolve MMA Singapore, Michelle hopes for more women to come forward to learn and train, and to pick their gyms wisely as well.

“Here (Evolve) we have just world champions, people that used to work a lot with different types of people. So if you choose a good place to train, there will be good instructors and teachers.”

Michelle also hopes for more females to train competitively if they have a passion for the sport.

“I see a lot of them who come once or twice or week, but that’s more for fitness.

“If you really enjoy MMA fights, Jiu-Jitsu or whatever, come and train more, it’s good.

“One or two times a week is good, but it’s more for fitness. You’re not going to get fat and it’s good for you. But if you really want to focus on it, you need to train a lot.”