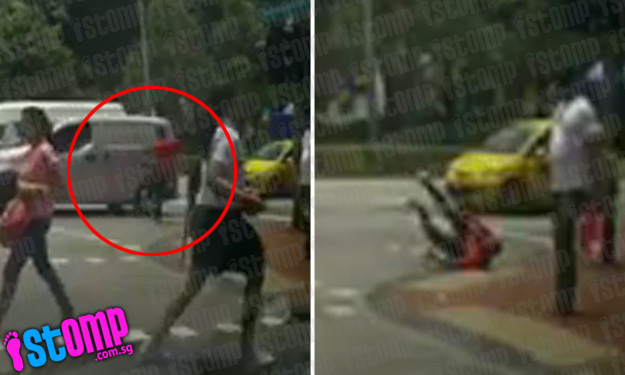 Stomper X was driving along Serangoon Road yesterday (Apr 2) at around 12.15pm when he saw a jaywalker kicking a small van at a traffic junction after getting honked at by its driver.

In a video clip sent by the Stomper, the jaywalker a can be first seen crossing the road even though the traffic light was showing a red man.

He was then honked at by the driver of the van just as he was reaching the other side of the road.

The jaywalker reacted by gesturing at the van's driver and kicked the vehicle just as it was moving off. He then fell onto the road thereafter.

The driver of the van stopped his vehicle just after the traffic junction and was immediately confronted by the jaywalker.

It is unclear what happened thereafter as the Stomper had already driven off.

Said X with regards to what happened:

"Many onlookers were disgusted by the jaywalker's act.

"Both him and the van driver were engaged in a heated conversation after that.

"I did not see what happened because the traffic lights already turned green in my favour."