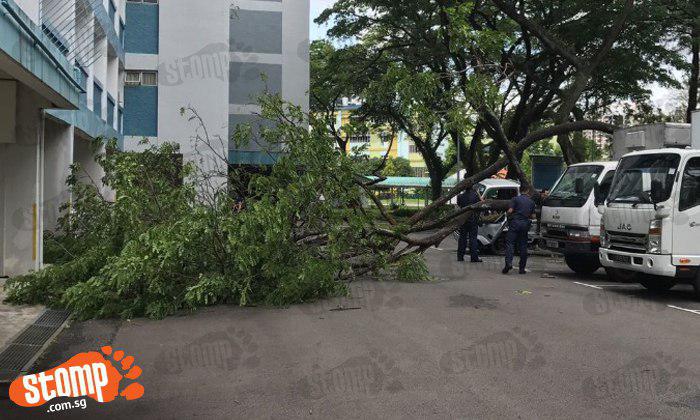 In the second such incident in days, a woman was seriously injured yesterday after a tree fell at a carpark in Yuan Ching Road.

In photos sent to The Straits Times, a tree appears to have fallen on the open passenger door of a lorry, crushing its window.

The tree fell in the carpark of a block of student apartments. The woman was visiting one of the tenants. She is understood to be Ms Cher Hwee Hwang, 48.

The Singapore Civil Defence Force said it received a call about the incident at around 2.30pm yesterday.

It said one person was taken to Ng Teng Fong Hospital, but did not give details about injuries.

Ms Cher was later transferred to the Intensive Care Unit for treatment, and the hospital said she is in a stable condition.

Ms Alicia Poon, who manages the student apartments, said she was in her office when the accident happened. When she got to the carpark, a woman was lying on the ground.

There was no blood, but the victim groaned in pain as she was helped into the ambulance, she said.

"Luckily, the lorry door took most of the weight," she said. "Otherwise, the tree would have fallen directly on her."

Ms Poon, who is in her late 40s, said this was the second time a tree had fallen there. An earlier incident happened last year, but no one was injured.

She was concerned as there are many residents and visitors to the apartments, including professors and researchers, some of whom are from overseas.

She told The Straits Times: "The authorities should look into the safety of old trees." She said that there were about 10 mature trees there.

The Singapore Land Authority said that trees in the area, which is state land, are maintained regularly. "Trees and greenery on state properties are maintained on a regular basis.

"Our priority now is to provide assistance to the family of the affected party, whom we are in touch with," a spokesman said.

This is the second such incident to take place in Singapore in a matter of days.

One person died and four others were injured when a 40m-tall tembusu tree fell at the Singapore Botanic Gardens on Saturday.