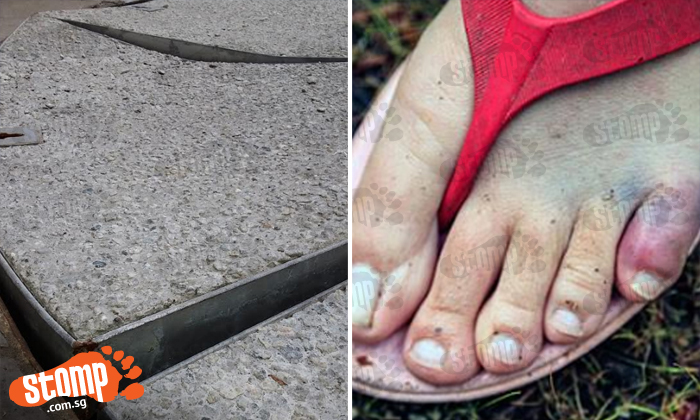 Stomper Henry was walking quickly to the nearest shelter on a rainy Tuesday (Feb 7) afternoon when he tripped over an unevenly covered grease trap and stubbed his left toe outside Toa Payoh Block 470 Secret Recipe outlet.

"On Dec 24 last year, I came across a group of people gathering around this grease trap that was barricaded with a 'danger' sign stand. I took some photos just for fun and carried on with my journey.

"However, on Feb 7, as I was walking back from the Toa Payoh Housing Development Board (HDB) Hub, it began to rain.

"So I started to walked faster as I was not carrying an umbrella. Suddenly, I tripped on the uneven grease trap cover and fell to the ground. I felt a terrible sharp pain on my left toe.

"The grease trap cover was obviously damaged, either bent or curved. I do not understand why the 'danger' sign barricade was removed and why the repair work was not done after nearly three months.

"Those people responsible for the repair should understand that the damaged grease trap cover can pose a great danger to the public.

"My greatest concern is whether the uneven grease trap cover will give way and collapse as time goes by."