Woman fakes 4-year relationship by photoshopping herself with complete stranger 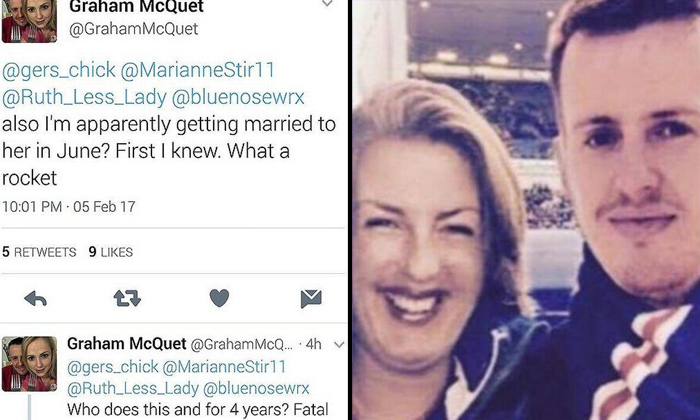 A woman somehow managed to pretend for four years that she was in a relationship with a man she had never met in her entire life.

Jill Sharp followed Graham McQuet on Twitter, and sporadically nicked his pictures and photoshopped her own face over that of his fiancée, Marianne Stirling.

To make things weirder, Jill would travel to the same places as the couple and pose for photos, so it looked like her and Graham had travelled together, The Lad Bible reports.

She even told her friends that she was engaged to him, and get this: Jill made Graham a fake Twitter account and sent messages between herself and her fake boyfriend to legitimise the relationship.

Her friends soon became suspicious and managed to track down the real couple and warn them about how their pictures were being used.

Said a friend of hers:

"Her posts were all champagne and flowers and how wonderful a life she was living with Graham.

"Whenever anyone asked when we were getting to meet him there was always an excuse. He was working, he'd hurt himself, he was ill - and on it went.

"She was leading this incredible life on social media but no one had seen her with him and it was just plain strange."

"She put up a picture claiming they were having a weekend away in London but the two images were completely different. It was obvious it had been taken on a different day.

"What we didn't know then was the real Graham and his real-life fiancée had been in London and Jill had then retraced their footsteps a month or so later to take the picture. It was totally creepy.

"So we started looking at her other images and it was evident in some of them they had been photoshopped."

While this was going on, Graham did not suspect a thing, but has since informed the police and an investigation was launched.

As funny as this may seem, we always have to remember that we do not fully know what is going on in someone else's life. Hopefully she gets the help she needs.