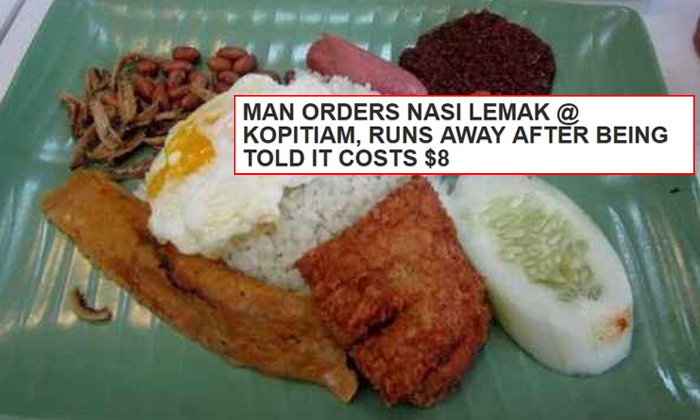 A reader of local website All Singapore Stuff (ASS) recently claimed that a nasi lemak meal that he ordered amounted to $8, which he felt was exorbitant and prompted him to 'run away'.

According to the Mar 12 article, the anonymous contributor alleged that he ordered a plate of nasi lemak with one hotdog, one egg and one small fish fillet with curry sauce from a kopitiam at Block 353 Clementi Avenue 2.

When the stall assistant apparently informed him that the meal cost $8, he responded that he did not have enough money and would go get some from the nearby ATM.

However, he "simply left without returning after that because he felt that $8 was too expensive for the meal".

He was also quoted as saying, "I tell her I go get money and zao far far. Who in the right mind would pay 8 bucks for that meal! Funny as hell I call all my friends faster zao got siao zabor try con me."

The post was reproduced on other websites such as World of Buzz and Singapore Uncensored.

However, a Google search on the image used in the ASS report shows that the photo was originally from a blog post and travelogue written in 2011.

The travel writer was blogging about "Singapore's famous Nasi Lemak at Qiji in Marina Square" and said that she "chose Nasi Lemak Sets 1 & 4" from the stall.

A picture of "Nasi Lemak Set 1 (Ikan Bilis, Egg, Otah, Fish Fillet, Chicken Sausages)" in her blog post is the same one used in the ASS article -- and it cost only $4.

It is unclear if the incident reported on ASS did indeed happen or if the alternative news website was merely using the old 2011 photo to illustrate its own story.

The writer of the article, purportedly a 16-year-old student, said she became depressed when a boy she was "duped" into having sex with two years ago turned out to be a schoolmate and has started taunting her.

She also alleged that despite making a police report, the authorities did not take action and advised her to drop the case.

ASS subsequently removed said article and put up the police statement in full on its Facebook page and website, adding that it "would like to apologise to SPF for any unfounded allegations made against them as it was unintentional".

Like most reports on ASS, both of these articles were stated as 'submitted by Farhan' while the identities of the original contributors were kept anonymous.