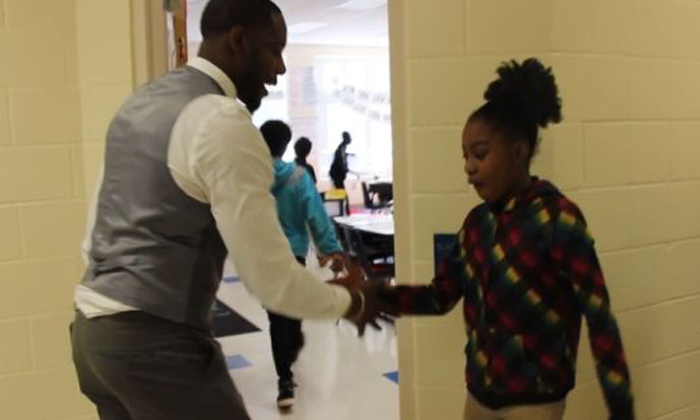 A primary school teacher in United States has been dubbed as the coolest teacher in the world after memorising elaborate handshakes with each of his pupils.

Barry White, Jr., a fifth grade English teacher in Charlotte, North Carolina, has come up with his own personalised handshake for every single one of his students based upon each of their personalities, Complex reports.

White cites basketballer LeBron James's exchanges with teammates as an inspiration for his customised greetings. He also says the idea came after coming up with one handshake for one fourth grader during last school year.

"I started with one simple handshake last year with a 4th grader.

"She would wait for me every morning before she’d go to class.

"She’d get in trouble sometimes for being late because she’d wait on the handshake."

"This year I started making handshakes with the kids at recess," White added. "It was just one or two students and then it became contagious. I saw how much it meant to them, so I said, ‘Come on. Everyone come on.’ Then it was my full class, then it was kids from other classes. Now I have 3rd graders wanting to do it too.”

White's effort has not gone unnoticed by the school's administrators.

"The only way to help our scholars achieve at high levels every day is to embrace the need for a meaningful and deep relationships.

“Barry’s handshakes represent his own authentic take on building those relationships.

"When I walk into my teachers’ rooms, I see the impact of those strong and trusting relationships.

"When kids know their teacher cares, they are attentive, engaged and driven to be successful."

Sounds like teachers who start the day with nothing more than a phoned in "Good morning" are officially on notice.