Oi driver of SGJ154D, can you not ruin everyone's CNY by nearly causing an accident? 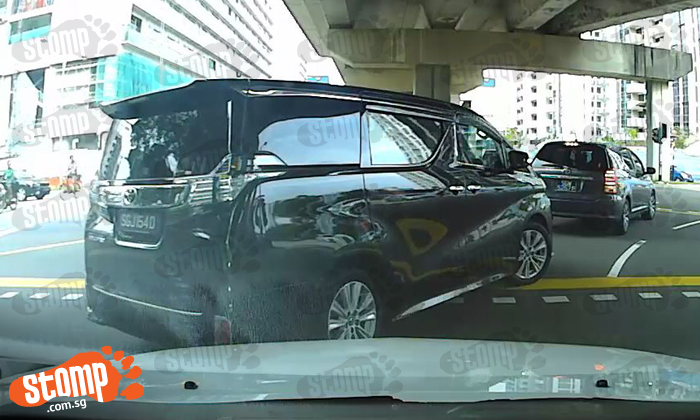 Stomper Johnny had a near-accident with a Toyota driver who swerved into his lane to make an illegal U-turn.

The incident took place at the T-junction of Sengkang East Road and Compassvale Street this morning (Jan 29), at around 9.30am.

Johnny elaborated on what happened:

"When we were moving off after the green light, a black Toyota MPV on my left suddenly swerved to the right to do an illegal U-turn.

"He was on the turn-right lane only, but he had been going on to make an illegal U-turn on the video.

"He would have caused an accident with my vehicle colliding into his side, had I not jammed hard on my brakes.

"This motorist is very inconsiderate and unmindful of his road manners.

"He also committed an offence by violating traffic rules and regulations.

"I have recorded his actions on my driving recorder.

"I am totally disgusted with his actions and dangerous driving. He has totally have no regard for safety.

"Besides endangering other motorists behind him, he also caused distress and alarm towards me. He nearly caused an accident for me and my family on the second day of Chinese New Year.

"I hope to share this with the public to show the kind of drivers that spoil our CNY mood."

The Stomper hopes that action will be taken against the errant driver and called for him to be "dealt with severely".

Johnny also shared a second video from his car's rear camera showing how the Toyota driver approached from behind and then 'cut his queue'.