Rain or shine must visit Istana: More than 20,000 visit the President's residence on the second day of Chinese New Year 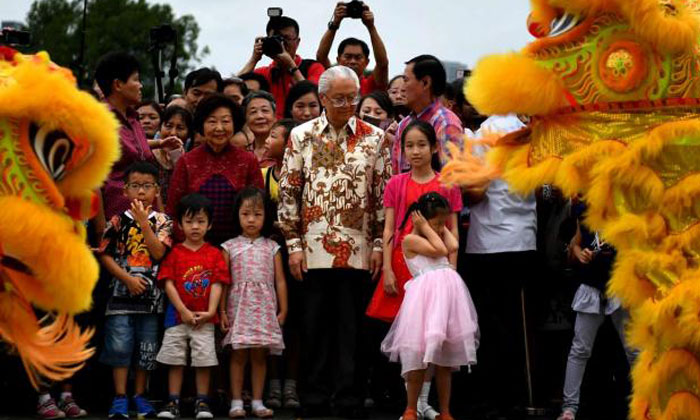 Overcast skies did not dampen the large crowds that gathered to visit the Istana on the second day of Chinese New Year, some of whom queued up for almost two hours to enter the grounds.

The Istana, the official residence of the President of Singapore, opened its gates early on Sunday morning (Jan 29), and by the afternoon queues could be seen stretching past neighbouring Plaza Singapura.

Though skies were grey, it did not rain, allowing more than 20,000 visitors to enjoy various performances, including displays by the Yuan Ching Secondary School Lion Dance Troupe and the Cixi City Celadon Ou Music Troupe.

President Tony Tan Keng Yam and his wife, Mrs Mary Tan, joined the crowds later in the afternoon and were treated to a performance by the Yi Quan Athletic Association's Lion Dance Troupe.

They also took in a performance by the Maha Bodhi School Symphonic Band, and visited a Chinese calligraphy booth as well as a bird display by Wildlife Reserves Singapore.

Mr Vic Leong, 62, had queued up for more than an hour with his wife and two sons to visit the Istana in the afternoon.

"We had some free time, so we decided to come here," said the retiree, adding that he had last visited the Istana in 2011,when his son performed there as part of the Deyi Secondary School band. "It's a very beautiful place."

Another visitor was Mr C.K. Ong, a Singaporean who has lived in Hong Kong for the past 35 years. He said he returns to Singapore every Chinese New Year, and after visiting friends and family, goes to the Istana during its annual open house.

"This is like our White House. We should be proud of it," said the 63-year-old retiree.

Related Stories
Funeral arrangements for Mr S R Nathan announced: Here's how you can pay your last respects
Whoa! Check out how the SAF special forces storm a simulated terrorist stronghold
No, you should not be here: Tourists pull out corals to pose for photos in Malaysia
Chinese New Year
president
istana
interesting
CNY
cool
tourists