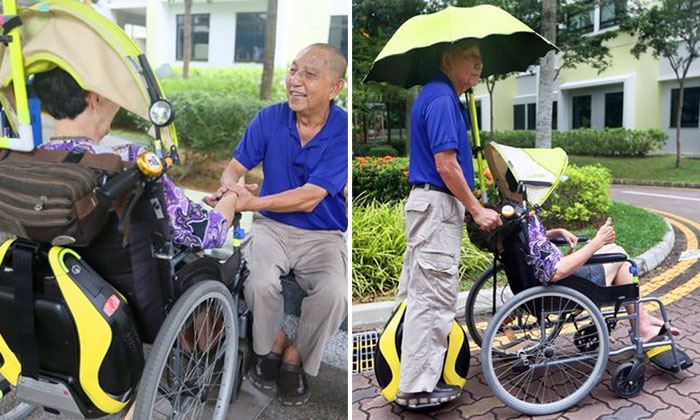 He takes his wife, who has dementia, on outings using a wheelchair built for two.

Mr Tan Ban Ho, a 72-year-old retiree, came up with his unique contraption after discovering that going out helps to calm his wife, Madam Loh Yock Yeng, 71.

Two months ago, to make it easier for him to push the wheelchair at his age, he attached an electric unicycle, which he bought for $600, to the rear of the wheelchair.

This enables him to ride the unicycle when pushing his wife.

Armed with technical knowledge from his years as an ITE lecturer teaching electronics, Mr Tan put the contraption together himself.

He installed a shade for his wife and a polyvinyl chloride pipe to hold an umbrella over his head.

He also made a metal and wooden ramp to hold the unicycle upright when it is not in use.

He told The New Paper last Wednesday that Madam Loh had been diagnosed with dementia in 2006.

"At first, I didn't understand what she meant when she said she wanted to go out, and she would throw tantrums at home," he said.

"A few months after her diagnosis, when I finally took her out on a wheelchair, we walked on a park connector for about 5km.

"She became very calm and happy, but the skin on my soles tore.

"Earlier this year, I thought of riding an electric unicycle behind the wheelchair so it would be faster and more efficient."

The couple now go out every morning after breakfast to places such as Marina Barrage, Japanese Garden and VivoCity.

Mr Tan's innovation and devotion to his wife caught the attention of the Ministry of Health's Successful Ageing Singapore Facebook page.

The Facebook post said: "We came across Mr Tan riding his unicycle and pushing his wife on her wheelchair while driving one day.

"This is not something you'll usually see in Singapore, and we thought it would be interesting to share his story on Facebook.

"Society tends to perceive seniors as more archaic in their methods, but Mr Tan has proven otherwise.

"He has shown us that seniors have the creativity and ingenuity to tackle problems, and he is a good example of how we have so much more to learn from the seniors around us."

Mr Tan told TNP that Madam Loh used to be active and would go to the residents' corner in their neighbourhood regularly to exercise and sing karaoke.

One day, when she was cooking vegetables, she kept asking him if she had added salt and Mr Tan suspected the worst.

"When I found out she had dementia, I was devastated and heartbroken. My wife was so healthy and rarely fell sick, so why did this happen to her?" he said.

"I was from Whampoa Secondary School and she was from Chung Hwa Girls' High School, and we would meet once a week for the activities.

"We got to know each other after a while and I thought she was a lovely and responsible person," he said.

The four of them live in a four-room flatin Dover Crescent.

He recalled the early months of his wife's illness as being very difficult.

"Her dementia caused her to act like a two-year-old child, so I couldn't comprehend what she was trying to say.

"Sometimes, she would stand next to me at 3am while I'm asleep and I would get a shock. But that's when I knew that she had soiled herself.

"She can't control her bowel movements and would smear faeces on the walls with her hands..." he said.

"If I don't take her out, she gets agitated and would shake doors and throw things.

"She also turns on the taps and gas stove, which was terrifying."

Once, someone made a police report after she threw a porcelain cup out of the window.

Every day, Mr Tan feeds and bathes his wife and changes the four layers of soiled towels on the bed and wheelchair without fail. When her hair gets too long, he cuts it for her.

Mr Tan said: "The doctor said her dementia is incurable, even with medication. The medical bills were $200 a month, so I stopped giving her the medication in the middle of this year."

Madam Loh no longer remembers her name and who her children are and even mistakes Mr Tan for her father.

When TNP asked Mr Tan what he would like her to remember most, he said: "I want her to know that I still love her, and I don't want her to worry so much and go through such hardships any more.

"I'm afraid of what might happen to her if I pass away first, but for now, I'll continue to push her wheelchair every step of the way."

To tackle the issue of Singapore's ageing population, the Ministerial Committee on Ageing launched a $3 billion Action Plan for Successful Ageing last August.

A Ministry of Health (MOH) spokesman told The New Paper: "It was launched as a national blueprint to help Singaporeans age confidently and lead active lives, with strong bonds to family and the community.

The plan has three objectives:

Opportunities for All Ages:

Seniors will get to work, learn and grow while staying healthy. Initiatives such as lifelong employability, senior volunteerism and retirement adequacy have been implemented.

Kampong for All Ages:

There are other initiatives, such as getting Singaporeans to live nearer their parents, and discounts and privileges for the elderly.

City for All Ages:

Singapore will be a city that supports ageing and where seniors can age confidently. A Healthcare 2020 Masterplan will expand and improve healthcare facilities and lower healthcare costs.

The spokesman said: "We also want to celebrate Singaporeans who age actively and positively, and change the narrative on ageing to a more positive one.

"We share stories of active agers and information relevant to our seniors, hoping to inspire them.

"Young Singaporeans are a key part of the national conversation on ageing, and MOH and the Ministry of Education have embarked on... outreach efforts to raise awareness and deepen our engagement among teachers and students on positive ageing."

NUMBER OF SINGAPOREANS AGED 65 AND ABOVE

NUMBER OF PEOPLE (AGED 65 AND ABOVE) IN SINGAPORE WITH DEMENTIA