Why the dip in cut-off points for the "popular" schools 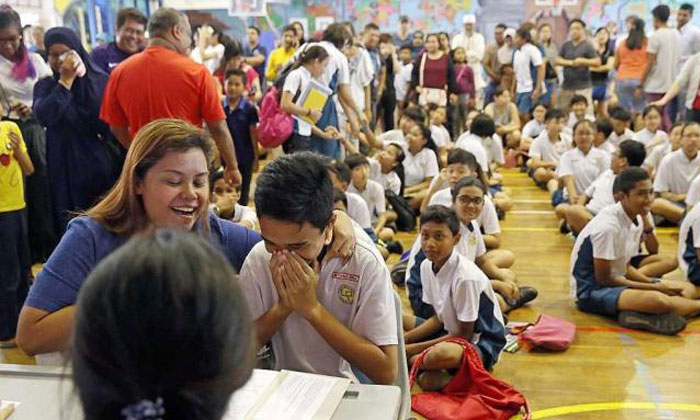 It was marginally easier to get into some popular secondary schools this year, with the minimum entry requirements easing by one to two points.

For instance, at both Raffles Institution and Hwa Chong Institution, the cut-off dropped one point to 260 and 259 respectively.

The cut-off point is based on the Primary School Leaving Examination (PSLE) T-score, which is aggregated from four subjects at the PSLE.

The score for entry to Methodist Girls' School's Integrated Programme dropped two points to 259 this year.

The cut-off for Dunman High School and CHIJ St Nicholas Girls' School's Integrated Programme was 257, a drop of one point for both schools.

Raffles Girls' School bucked the trend among the popular schools, with its cut-off point going up a point to 261.

Nanyang Girls' High School had one of the highest cut-off points at 264, the same as last year's.

Students were informed yesterday of their secondary school postings and were told to report to the schools today at 8.30am.

Those applying for transfers should first report to their posted secondary schools, and submit an application to the schools that they wish to appeal to by noon today.

The results of the appeals will be made known to the applicants early next month.

But there is little option for those hoping to transfer to schools where they did not meet the minimum entry requirements.

The Education Ministry issued a directive last year to stop secondary schools from taking in these students.

Prior to this, schools could accept students with lower scores on appeal if they had vacancies.

But this left some secondary schools with fewer classes as students moved to the popular choices.

As in recent years, the ministry did not release this year's top score, which indicates how well pupils did compared with their peers.

Property agent Jolyn Tan's daughter was posted to Gan Eng Seng School yesterday, which was not her first choice.

Madam Tan, 46, is aware of the new rules and has not decided if they intend to appeal to get into another school.

"We will still go to the school for orientation and take a look at its environment before deciding," she said.