Why grades should not define our kids 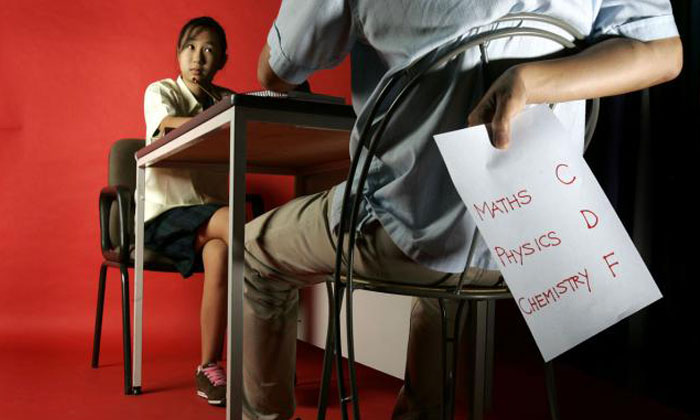 "Your grades do not define you," said Mr Jack Cook.

That was Debbie's defining moment.

Debbie, a perfectionist, always had the best academic results in her earlier years at school. However, when studying economics at junior college, she was thrown off balance.

Despite putting in more effort - hard work as well as getting extra coaching from her teacher, Mr Cook - Debbie just could not grasp the subject.

She could not understand nor accept the poor grades she got for her economics examination. She felt ashamed and guilty, so much so that she avoided her teacher and did not visit the school after graduation.

A few years later, when Debbie heard that Mr Cook was retiring and leaving Singapore, she plucked up the courage to visit and bid him farewell.

Mr Cook greeted Debbie with a big smile and warmly welcomed her.

She asked him sheepishly if he remembered her as the only student who had scored a D in his economics class.

Mr Cook simply replied: "I hope that you didn't let the D define you." In that moment, Debbie learnt a valuable lesson about self-worth.

She realised that her apprehension and fears were unfounded and unnecessary. Her teacher remembered her well and fondly, not for her grades, but for her attitude, efforts and character.

"I am always pleased to see students return to visit and stay for long chats, especially those who supposedly did 'badly' in my subject," said Mr Cook.

"It meant that they didn't hold it against me; but more importantly, they weren't holding it against themselves and had moved on.

"Many of the happiest, most fulfilled people I've met have had their moments of self-doubt and failures as students. That setbacks are there to be learnt from is a terrible cliche, but true."

This episode changed Debbie's perception about herself and her values. She realised that her focus on academic excellence had set her up for failure precisely because she was so afraid of failing.

Debbie learnt that people had different talents and strengths. The key was to accept and work on one's weaknesses, and develop one's strengths.

She understood that it was more important to be resilient, enjoy learning and pursue it passionately.

Later, Debbie became a teacher and her experience shaped her approach.

At a secondary school, she noticed that a student, Dan, was struggling with mathematics and science but was incredibly gifted in art.

Debbie spoke to Dan's parents during a parent-teacher meeting, encouraging them to recognise his talent and not focus only on his grades.

She was confident that Dan could be a successful artist in the future.

Dan was encouraged because his teacher recognised his talent and did not penalise him for aspects he struggled with.

Over time, he honed his artistic skills and was also motivated to do his best in his academic subjects.

Every child is unique. Forcing them into areas that are not their forte is more likely to destroy rather than build them up.

Our job as parents is to help them identify their gifts and preferences and help them bloom.

Another way we can help is to guide them to discover and access the different paths that their talents and passion can lead to.

As parents, we also need to be careful about the implicit signals we send our children through what we say and ask. When the child comes home with a test, is the score the focal point?

Do you discuss how the results were achieved, acknowledge any progress or talk about how to tackle the challenges?

Dr Carol Dweck, psychologist and professor at Stanford University and a pioneering researcher in the field of motivation, says: "Praise the process that kids engage in: their effort, their strategies, their focus, their perseverance, their improvement.

This process praise creates kids who are hardy and resilient." In other words, focus on the process, not the end result.

Dr Dweck cited the results of a game she created which rewarded process. "We got more effort, more strategies, more engagement over longer periods of time, and more perseverance when they hit really, really hard problems."

This means that by focusing on the process, we are actually increasing our children's chances of success in life.

Just like Mr Cook and Debbie, we all need to look beyond academic success for our children. As parents, we must not let grades define our child but, instead, focus on their attitude, effort and strengths.

Above all, show them that we love them unconditionally, that we accept them for who they are, regardless of their grades.