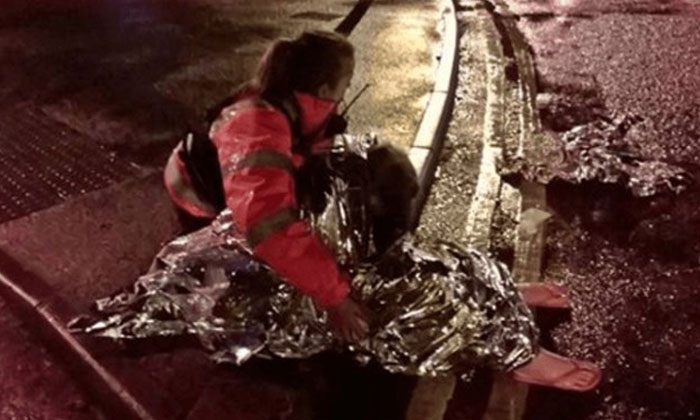 How would you feel if you were abandoned in the cold by your 'friends' you partied with, and too drunk to remember anything but your name? You're sick and you can't stop puking because of all the alcohol, and you're left stranded with no one to help you get home.

This is what happened to young Emily recently.

According to Distractify, Emily puked all over herself following a night of heavy partying with her friends. Thankfully, a group of volunteers who patrol the streets at night to help keep people safe at night were there to take care of her.

Seeing her in such a state outside in the cold and rain, the group contacted her friends to come and pick Emily up, but they treated it as a joke and laughed it off.

Eventually, the Guardians called an ambulance which took Emily to the hospital at 4am the next day.

The Guardians took care of Emily, and even wrote a long Facebook post to Emily's 'friends' who abandoned her despite their calls and messages.

The Guardians took care of Emily, but not without having some choice words for her friends who abandoned her, despite their calls and messages.

Here's what the message read:

You may have started your night together enjoying the vibrant bars and clubs of Cheltenham, but somewhere along the way you lost your friend, you lost Emily. When we found Emily she had already been sick in the back of a taxi and in the care of taxi marshals.

It’s fair to say she had seen better days. When we contacted you, you told us that you would wait outside a club on Regent Street for her.

We were keen to return her to her friends and into your care. We took Emily to the club and you were not there.

Emily told us that she was staying in Montpellier, that’s all she remembered. It was dark, raining hard, you knew where we were yet still you never came.

We walked Emily to Montpellier, we called you again and you promised you would take a taxi and help us help your friend yet still you never came. We told you that we would need to call Emily an ambulance as we could help her no further, we did not have the answers, you did, yet you found it funny, you mocked us, and still you never came.

We called an ambulance, and they came. Friends of Emily, we looked after your friend for two hours. We cared for her unconditionally whilst you purposefully gave us the runaround, hindered our progress, and despite our pleas you never came. One day you may find yourself in our care.

We will care for you unconditionally, we will ensure you are safe. I hope you read this and understand that you tied up valuable resources for over two hours and forced the attendance of an emergency ambulance at a cost to the NHS of £300. Most of all you were not a friend of Emily’s.

I hope you enjoyed your night at the expense of us, South Western Ambulance Service and Emily. Great job guys, you can be really proud of yourselves.

Picture: Guardian Emma attempts to keep Emily warm in the rain whilst waiting for an ambulance shortly after 4am this morning.

The post was shared over 2,000 times with many netizens absolutely shocked about the carelessness of Emily's drunk friends.

"Poor Emily. I hope her 'friends' realise how irresponsible they were and I hope Emily can find a new group of friends who will be there for her better than they were. Well done Guardians! You and the street pastors did a fab job!"

However, some others felt that Emily should've "known her limits" and that it's no one else's job to look after her well-being.

"What about the fact that Emily drank too much, make the tit pay."

What do you think? Is it Emily, or her friends' fault?