Volunteer who cooked for teen trapped in baby's body: 'It was my way of comforting her' 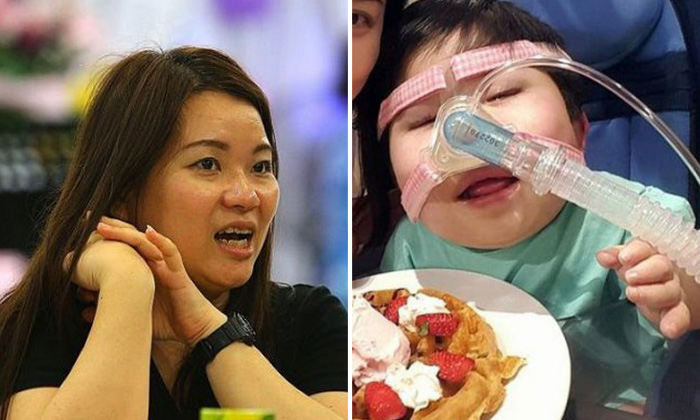 She loved cooking and teenager Teo Pei Shan loved food. One could say they were made for each other.

So for the last few weeks of Pei Shan's short life, Miss Nancy Quek, 40, cooked for the 17-year-old girl and her parents every day and delivered the meals to them at KK Women's and Children's Hospital.

On Tuesday evening, as usual, Miss Quek walked into Pei Shan's hospital room with dinner, only to be shocked by news of her death.

Speaking to The New Paper at Pei Shan's wake yesterday, Miss Quek (below), who works in the supply chain industry, said: "I was 10 minutes too late. I was in a total daze when I found out that she had passed away.

"She couldn't eat the meal I had prepared, but I told her mother that I would prepare a final meal for Pei Shan."

At the wake, a meal of Pei Shan's favourite food of teriyaki chicken, kimchi, miso soup, rice and tiramisu was laid out before her white coffin - Miss Quek's last homecooked meal for the girl she had grown attached to.

She said: "Pei Shan was a foodie, and she fell in love with teriyaki sauce.

"Cooking for Pei Shan and her family was my way of providing comfort to them, even when she was in hospital."

Miss Quek got to know the family about two years ago while volunteering with a charity.

She later started cooking meals for them at least once a week for about a year, after Pei Shan showed interest in a dish she had posted on Facebook.

When Pei Shan asked her mother, Madam Chew Siew Cheng, 47, to ask Miss Quek for the recipe, Miss Quek offered to cook it for them, instead.

"I felt drawn to her, she was just so full of happiness. Each time I saw how she appreciated my food, I felt like giving even more to her and her family," she said.

On Tuesday evening, Pei Shan's battle with the rare disease that robbed her of the ability to walk or breathe on her own, and severely stunted her growth, ended when she died in hospital.

The teenager, trapped in a baby's body, had been looking forward to celebrating her 18th birthday on Aug 5, but the big party and hotel stay that her family and friends had planned was not meant to be.

Yesterday evening, more than 80 family members, friends and strangers paid their respects on the second day of Pei Shan's wake at a multi-purpose hall near her home in Pasir Ris.

There were balloons, soft toys and ribbons in the hall - an event worthy of a princess, a term of endearment for Pei Shan by close friends and family.

Family friend and founder of charity Portrait From The Heart, Mr Lawrence Loh, 50, said he and some volunteers had planned to throw two big parties for Pei Shan's 18th birthday, and had sent out messages to potential sponsors on Saturday.

"She seemed to be getting better, so we thought we had better start planning for her much-anticipated birthday. But before we could get replies from anyone, Princess..." said Mr Loh, his voice trailing off.

Miss Quek helped to arrange the decorations for the wake, based on Pei Shan's desire for it to be themed after her favourite rabbit cartoon character, My Melody.

Mr Alvin Goh, 40, owner of An Lok Funeral Services, who handled the wake and funeral arrangements pro bono, said that as a parent of two children, he was touched by Pei Shan's fighting spirit.

"I'm just doing what I can to take the load off (her parents' minds). I'm not surprised by the crowd, and I'm sure more people will come over the next few days. She was a girl who touched the lives of many," he said.

Strangers who did not know Pei Shan came from all over Singapore to pay their respects.

Mr Kenneth Yeo, 23, a part-time actor, made the 1½-hour journey on public transport from his Jurong home.

He had seen Pei Shan on television and read about her hospital stay in the newspapers a few weeks ago.

"I didn't know her personally but after hearing about her family's struggle, I wanted to pay my respects. I also want to show some care and concern for her family," he said.

Mr Yeo has a heart condition that renders him breathless at times, and he said he could empathise with the struggle that Pei Shan and her family went through.

He added: "Hopefully Pei Shan will be the guardian angel that guides her family from now on."

On Tuesday evening, the teenager died at KK Women's and Children's Hospital.

She had asked her parents to check her into the hospital earlier this month after feeling breathless because she wanted to be well enough to celebrate her 18th birthday on Aug 5.

Madam Chew, 47, said at her daughter's wake yesterday: "After each hospital stay, the three of us would go home together. We never thought that we would be leaving the hospital without her this time."

TNP first reported on Pei Shan and her condition in 2013.

Following the report, many readers showed their support by donating and sending get-well wishes to the family.

Although doctors did not diagnose her exact medical condition, Pei Shan's medical record states that she had Mucopolysaccharidosis Type III (MPS III) - a progressive disorder that affects the brain and spinal cord.

The tightly-knit family struggled through Pei Shan's multiple operations and hospital stays, and weathered through financial difficulties resulting from her treatment.

Pei Shan did not let her condition stop her from painting and playing the piano.

One of her watercolour paintings made it to the front cover of Club Rainbow's commemorative hardcover book Colour Of Life, Celebrating 20 Years Of Club Rainbow, in 2012. In 2014, she performed at a concert organised by the Beautiful Mind Charity at the School of The Arts.

Madam Chew said her daughter's death is still "too surreal", and she and her husband, cabby Teo Qi Kuang, 57, are not quite sure what their next step will be.

"I told her (before she died) that if she left us, her father and I would not have any more hotel stays. But she insisted that we celebrate her birthday every year on Aug 5.

"She said that although she wouldn't be there, we could bring along her photo to the celebration," said Madam Chew.