This 5th grader has more game than you ever will, and this love note proves it all 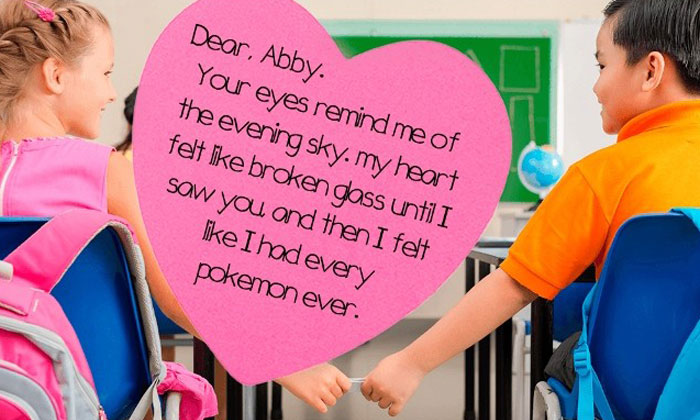 According to Distractify, this love note is a master piece. And we think so too.

Redditor dreichert87 posted this inspiring love note that his niece received from a fellow 5th grader in her class.

For those who might not be able to decipher elementary school handwriting, this is what the letter reads:

Your eyes remind me of the evening sky. My heart felt like broken glass until I saw you, and then, I felt like I had every pokemon ever. I love how you play Zelda even when people think it's weird. If you liked me it would be my first ever victory.

We agree there are some really complex metaphors in there, but feeling like you've filled up the pokedex after seeing a girl -- is probably the best compliment any 10-year-old could receive, don't you think?

Oh oh, and the little details like every 'i' dotted with hand drawn hearts. Way too cute.

One thing's for sure. This kid has game.

One netizen even said:

"This reminds me of the first love note I received in elementary school - "I love you more than Mr. Krabs loves money.

"I was the envy of all the other girls until we broke up two weeks later."

Unfortunately, there's a heartbreaking plot twist to the story, the the little poet had a dark past.

According to Redditor dreichert87, the boy had previously hit a girl at school, so his niece (Abby) declined.

However, Abby settled the situation like a mature adult would and told the boy they'd still be friends.

Oh, and that they'd continue to talk about Zelda during art class.

Kids, the grow up so fast.