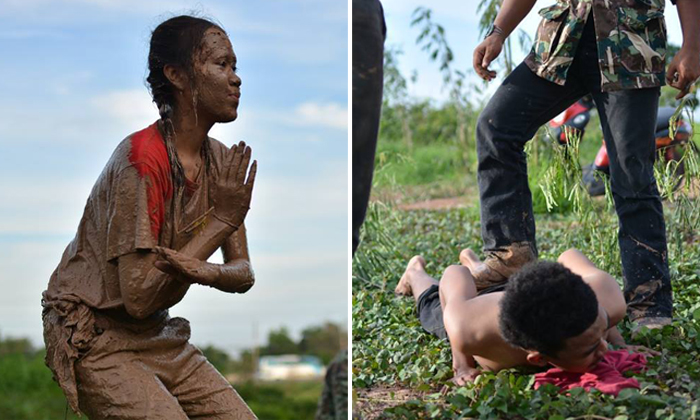 An orientation camp for freshmen at Thailand's Ramkhamhaeng University has come under fire after photos of students allegedly being abused were posted online.

The images show students brushing their teeth with chilli paste, shirtless male students making mouth-to-mouth contact, and a young man sitting in a rubbish bin, among others.

In one photo, a shirtless male student is lying face down on the ground as a man steps on his back. In the foreground, the blade of what appears to be a parang is visible.

The photos were posted on Facebook on July 26 by Anti Sotus, which describes itself as a group that is against such initiation rituals for students.

This comes as the National University of Singapore (NUS) has suspended all student-conducted freshmen orientation activities, after reports of inappropriate games.

The NUS Students' Union on Sunday (July 31) apologised on its Facebook page for the "indecent, reprehensible games", which included the re-enactment of a rape scene.

In Bangkok, Ramkhamhaeng University is investigating the alleged abuse of its freshmen during orientation activities, reported Coconuts Bangkok on July 28.

According to the online news site, senior students in the group said that the freshmen in the photos were merely "acting" and that it was all in good fun.

It also reported them as saying that making the freshmen brush their teeth with chilli paste was a mental test.

After the orientation activities were slammed by Facebook users, the organisers, student group Langsuan, defended their actions.

The group's president, Pathiparn Meepian, 21, said the activities were aimed at teaching freshmen the importance of endurance and unity, reported Coconuts Bangkok.

"If you were there, you'd know it wasn't as cruel as it looks in the pictures. I think it's not violence. Well, you can say I'm selfish, but all the freshmen who agreed to go knew what was going to happen," Pathiparn was quoted as saying. "I don't think too much about people who don't know the truth."

The student who had been photographed sitting inside a rubbish bin reportedly told the media that he had not been forced to do so, and was just clowning around.

Another student, who was crying in a photo, said she was only pretending to do so.

"We were just joking within our group. I feel bad for my seniors. I don't like that they were scolded (by the public)," she was quoted as saying on Coconuts Bangkok.

Nevertheless, the board of the university is investigating the alleged abuse of freshmen during the orientation games and has said it would punish those responsible for the activities, according to the online news site.

This is not the first time orientation activities have come under the spotlight in Thailand.

In 2014, a 16-year-old freshman from the Pathum Thani Technical College died after he took part in orientation games, reported Coconuts Bangkok.

His body was reportedly dropped off at a hospital in Hua Hin by students, who told the staff there that the teen had drowned.

It was later discovered that the teen had been dead for an hour when he was taken to hospital, said the report.