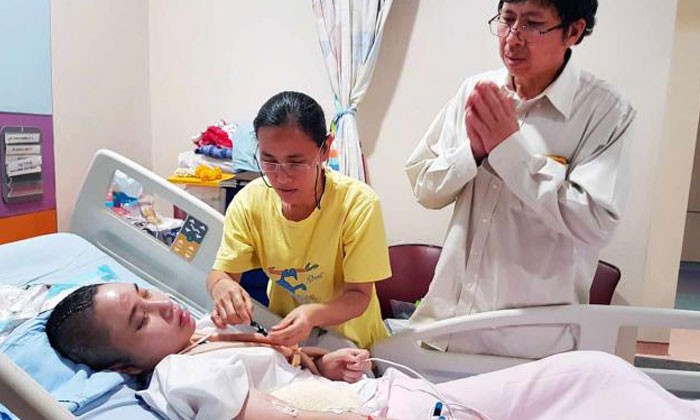 A Thai teenager who was left in a coma and fighting for her life after being hit by a car here last month is now showing signs of recovery.

San Yu Adventist School Secondary 2 student Aroonrak Jattanathammajit was hit by a car after leaving her hostel in Balestier Road on Sept 18.

She had been on her way to school for a programme involving needy residents of Moulmein.

"She can now move her hands and her legs slightly. She can now cough," said her father, Mr Sarayuth Jattanathammajit,49, who flew here with his wife on the day of the accident.

"Doctors say it's a good sign," he said through a translator.

After she was hit, the 16-year-old was taken to KK Women's and Children's Hospital (KKH) where she underwent two brain operations.

She spent 10 days in the Intensive Care Unit and a day in the High Dependency Ward before being moved to a normal ward.

It is not known if the driver who hit her has been found. Investigations are ongoing.

Her parents, who run a small rubber trading business in southern Thailand, have been with her every day since she was admitted and have set up a makeshift bed next to her.

Some members of the public have invited them to stay in their homes but they said they would rather be by their daughter's bedside. "I am worried about her the whole day," said her mother, Mrs Jiranee, 45.

Housewife Nicha Thang, 45, a family friend, said: "They're at the hospital every day. There's improvement but she is still unconscious."

Staff and students of San Yu, as well as members of the Seventh- day Adventist Church, have been visiting Aroonrak daily and offering support to her parents.

The school is working with an insurance company to file medical claims.

Under a Council of Private Education scheme, Aroonrak is insured for up to around $20,000 but her medical bills have already come up to about $70,000.

The foreign student is not entitled to medical subsidy. Her parents, whose business is not doing well, are grateful to KKH for not pressing them for payment so far.

The school plans to have a fund- raising drive in the middle of this month to help the family.

Related Stories
Female pedestrian lies on road after accident with car at Jurong West Street 64 junction
Teen with rare liver disease regains sight and hearing after coma -- thanks to Hi-5
Maris Stella boy who died in school bus told mum not to argue with grandma -- something he had never said before
More About:
accident
Thailand
teen
teenager
youth
injured
hospital
thai teen hit by car