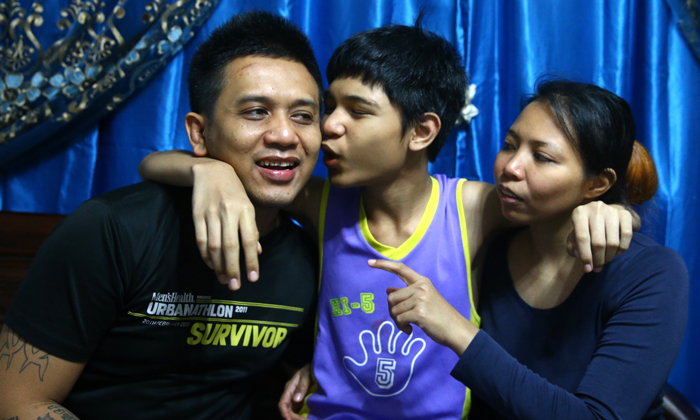 Many children are fans of Australian children's group Hi-5 because of their catchy songs and upbeat personalities.

But one teenage boy became a fan after Hi-5's music saved his life.

When Mohammad Haziq Aqil was a two-year-old, he fell into a coma after a bout of high fever and fits.

But the coma had caused temporary blindness and hearing loss.

His parents started playing him songs from children's television show Barney and Friends, but that did not trigger any reaction from Haziq.

So they moved on to Hi-5 songs.

To their amazement, Haziq began to respond to the music gradually, by moving around and smiling.

Madam Roziwani, who has a part-time retail job, told The New Paper with a laugh: "He would be dancing while lying on the bed."

Haziq, who is now 15, has been a massive fan of Hi-5 since then. He knows most of their songs and dances, and watches videos of them on YouTube.

Haziq's dreams came true when he got to meet the cast of Hi-5 while they were on tour in Singapore, on June 19 at United Square Mall.

Make-A-Wish Foundation Singapore worked with Hi-5 Operations to arrange for Haziq to attend the show, and meet the cast backstage beforehand.

Ms Leanora Lyn Gaffar, programme services manager of Make-A-Wish, said: "Seeing how excited Haziq was to meet the cast made it a very special moment."

Make-A-Wish was able to grant a wish for Haziq, who has a rare liver disease called biliary atresia.

Biliary atresia occurs when the bile ducts, which carry bile from the liver to the gall bladder, are absent or damaged.

This causes bile to accumulate in the liver, which may damage it and lead to liver failure.

When Haziq was one month old, he underwent an operation called the Kasai Procedure, to remove and replace his bile ducts, but it was unsuccessful.

So he had to undergo a liver transplant, but it could take place only when he was two years old, after he had grown and put on more weight.

Mr Hermi, who is unemployed, donated part of his liver to Haziq.

He said: "It was either my wife or me, so I did it and donated to save my son."

Even though there were no complications from the transplant, Haziq still has to take medicine for the rest of his life, as his body can reject the donated liver at any time.

He also has to take some steroids for his growth, and goes for check-ups every three months.

The medicine Haziq had to take before his transplant also possibly caused an injury to his brain, which affected his mental development.

Haziq goes to school at the Movement for the Intellectually Disabled of Singapore, and attends speech and occupational therapy lessons at AWWA after school every day.

The initial plan was to fly Haziq out to Australia to meet Hi-5, but as it turned out, Hi-5 was going to be in Singapore in June.

"His face just lit up when he met the Hi-5 cast," Madam Roziwani noted. "I've never seen him that happy."