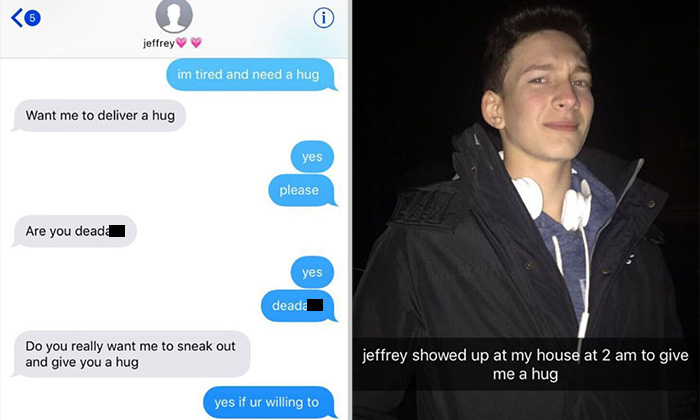 Would you sneak out of your house at 2am to give your friend a hug? Well, this guy would.

Twitter user @nickyswank (Nicole) desperately needed some comfort, and texted her friend, Jeffrey, "I'm tired and need a hug", in which he replied, "Want me to deliver a hug?".

According to The Lad Bible, Jeffrey arrived at Nicole’s house at 2am, ready to give out the promised hug. The pair then went out for an early breakfast to celebrate a new milestone in their friendship.

Nicole eventually shared photos of the ‘delivery hug’ on Twitter, with a caption, "Get u a friend like this".

Many netizens insisted that Jeffrey and Nicole were more than friends, and that he was being badly ‘friendzoned’.

Nicole was quick to clear things up, and said that they were just good friends.

Friend zoned or friendship goals, we got to admit that Jeffrey is a keeper.