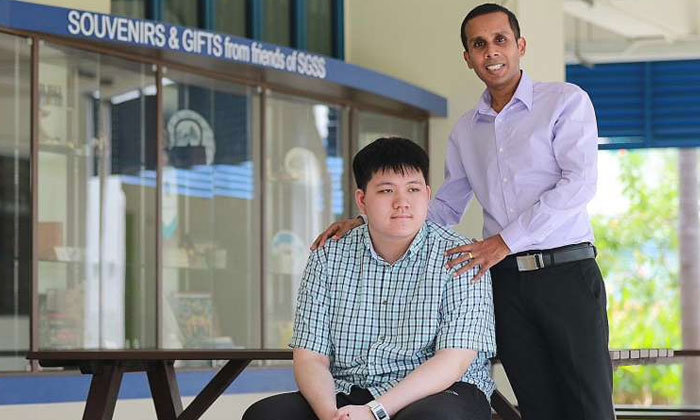 "It is not often that someone comes along who is a true friend and a good writer."

The ending to beloved children's book Charlotte's Web by E.B. White gives an apt rendering of the relationship between teacher Jeyaram Kadivan, 34, and his former student, Mr Caleb Tay, now 20.

Over the course of a year in 2009, Mr Jeyaram spent his weekends thumbing over a paperback edition of the novel, scanning each page into his laptop using a machine that converted the scanned images into words.

If a paragraph was followed by a photo, he would diligently paste it in. He did it all for the sake of a special needs student at St Gabriel's Secondary School, where he works.

Mr Tay, who joined the school in 2009, had lost over 80 per cent of his sight by the time he reached Secondary 1. When he was around five, he found out he had cone dystrophy, a degenerative eye condition. He could not see even nearby objects. His eyes got tired and dry easily, and prolonged reading worsened his vision over the years.

Today, he estimates, he has only 10 per cent of his vision left.

He was the first and only visually impaired student at the school.

"Even though I am visually impaired, Mr Jeyaram supported me and gave me the opportunity to reach my potential," said Mr Tay, who is now studying business at Singapore Management University.

For his dedication in helping Mr Tay and other special needs children at the school, Mr Jeyaram, an allied educator for learning and behavioural support, was given the Leading Foundation Teacher Award (LFTA) this month. The annual award honours passionate, dedicated teachers involved in early childhood and special needs education.

When Mr Jeyaram started working at the school in 2007, it had yet to set up a support system for those with special needs. He eventually helped such students by teaching them skills outside the classroom.

"I would have supplementary sessions with them," he said. "Students with dyslexia need support in language, while students with autism learn social skills and behavioural management skills.

"When Caleb came, it was a shock as we had never had a student who was visually impaired," he recalled. "We had to start from scratch."

Determined to help the boy, Mr Jeyaram reached out to his own lecturer at the National Institute of Education (NIE) who is visually impaired. Even though Mr Jeyaram does not have a family member with special needs, he has built up extensive knowledge. He sat down with school counsellors and experts to find ways to help, making progress through trial and error.

While he did not directly teach Mr Tay a specific subject, he worked hand in hand with the subject teachers to make sure Mr Tay was not left behind.

Among the school equipment that he helped to modify for Mr Tay was a bunsen burner. He taped the tip and base in striking yellow so Mr Tay would not get too close to the flame while doing experiments.

Many times, Mr Jeyaram had to enlarge text and graphs to reduce the strain on Mr Tay's eyes, but that meant having to reformat the pages. He remembers running into a host of problems, for instance, with English papers, "references to particular lines would not match".

Mr Jeyaram insists that, even though he helped Mr Tay with learning tools, no student was given special privileges over another. "Caleb performed duties at the library club. He wrote reviews and designed posters," he said.

With the school's guidance, Mr Tay scored seven distinctions at the O levels. Later, at Catholic Junior College, he aced his exams again and was able to enter university.

"I am so thankful that Mr Jeyaram believed in me," said Mr Tay.

Seeing his special needs students excel is reward in itself. "I would have not been able to do that much for Caleb and all the students if the teachers and school had not been accommodating. The child might have the potential but, if the environment is not supportive, even a bright student might not get far."