Students in insurance: He cleared $19,000 loan in one lump sum; she won Top Sales award during internship 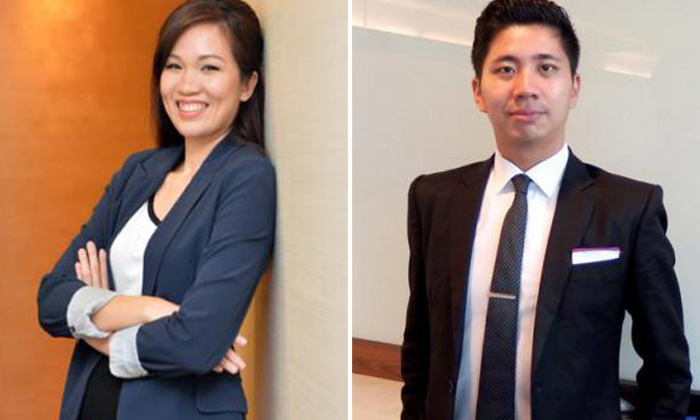 More undergraduates are joining the insurance industry, according to Great Eastern and AIA Singapore. TOH TING WEI (twtoh@sph.com.sg) speaks to two who sold financial plans while still studying for their degrees.

He sold insurance while still a student

Yet, Mr Chew Zhan Lun, 24, graduated only two months ago. In 2014, while he was studying banking and finance at Nanyang Technological University, he joined Great Eastern as a financial consultant and managed to earn $36,000 in the 2015 financial year.

He had to sit for six Capital Markets and Financial Advisory Services examinations over two months to attain the requirements needed to be a Great Eastern agent from the Singapore College of Insurance.

He then started going door to door selling insurance.

On school days, he would work three nights a week.

During his school holidays, he worked six nights a week, averaging two and a half hours each night.

The avid gamer even cut back on playing computer games to focus on his job.

The going was tough at first.

Mr Chew said: "For every one person who said yes, there were nine who said no."

He soon learnt to take rejection in his stride and he stuck by a policy of not using a hard sell technique.

Instead, he tried to be patient, proving his expertise to potential clients while becoming friends with them.

His philosophy? "Not every friend is my client, but every client is my friend."

Mr Chew had wanted to become a banker, but he joined the insurance industry to gain experience in the financial industry.

He found it a meaningful line of work and, after half a year, he decided to stay on.

He said: "For example, at a funeral, some professions would be asking for payment from the family, but an insurance agent would be the one handing over money.

"This is something I take pride in and I hope to get more recognition for this line."

Mr Chew has earned praise from his manager, Mr Alan Phua, 30, who said: "Zhan Lun always stood out for his creative and bold ideas... He has impressive potential.

A Great Eastern spokesman said the company is seeing an increasing number of student financial consultants joining their 3,200-strong team, but said that they are unable to provide specific figures.

She said: "From our experience, the young advisers are dedicated, committed and hard-working in their own way."

"They relate well with their peers and hence are able to effectively communicate to them the importance of insurance and the need for early financial planning."

Mr Chew has his eye on setting up his own agency in the future.

She is only 21, but the final-year business student at the National University of Singapore qualified for AIA's rising star club in June.

She also received the Top Sales award during her summer internship at AIA last year.

Miss Marissa got interested in financial planning in her first year of university, after attending a career talk by SP-Win, an authorised representative of AIA.

"You learn about the impact you can have on people when you help them with their claims and savings," she said.

She found that she connected with people her age and was able to explain financial planning to them.

"At the university level, most students do not know much about financial planning, but as someone in this line, you are the go-to person when people have questions," she said.

Juggling her studies with her work came with some sacrifices.

Miss Marissa said she did not have time to indulge in her favourite Korean dramas and Game of Thrones TV series.

Last year, she gave up going to South Korea for an exchange programme as part of her undergraduate business course because it would take place at the same time as her internship programme at AIA.

An AIA spokesman said that agents who are also undergraduates help in getting their peers to understand the importance of financial planning from a young age.

She added: "Some (student consultants) have really excelled and even received commendations, recognitions and promotions to financial services manager (positions) even before they graduate."

While AIA declined to reveal specific figures, it confirmed that its number of agents who are still students is increasing.

Ms Wong Sze Keed, chief agency officer of AIA Singapore, said: "The job flexibility, strong mentorship and the AIA brand are some key reasons they have cited for joining us."

Would you buy from a student agent?

While the number of students also working as financial consultants has been growing, the reception towards them seems to be mixed, judging by responses from people The New Paper spoke to.

Army regular Chia Mui Sowe, 50, whose family owns six insurance policies, would consider buying policies from a student, as long as he is convinced by the terms of the policy.

Mr Chia said: "It doesn't matter who sells me the policy, as long as it is something I need."

Undergraduate Nowell Ng, 21, feels that it depends on the agent's knowledge of the policies.

She said: "I wouldn't buy from someone who is very new to the job, (regardless of whether he's a student or not)."

However, undergraduate Yong Zhen Kang said he would think twice about buying from student financial planners as he doubts their long-term commitment to the job.

Mr Yong, 24, who owns one hospitalisation insurance policy, said: "I don't want (to be in a situation) where I sign up with a student financial planner (and then he) quits after he graduates."