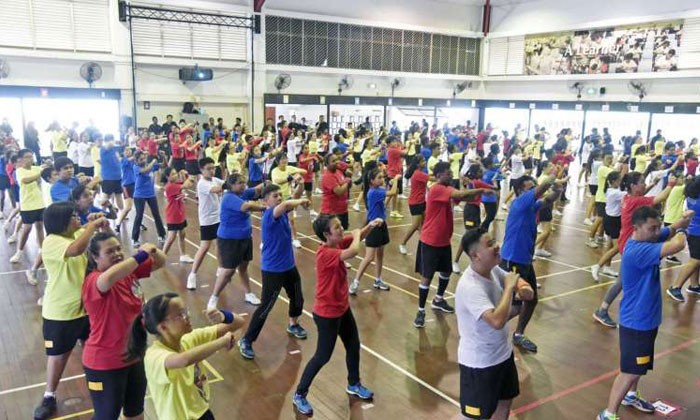 With only five minutes on the clock, students rushed down the staircase into portable toilets. Others collapsed onto the wood floor, massaging their limbs and wiping sweat from their faces. Teachers hurried down rows of students, distributing bottled water, energy drinks and bananas.

Grooving is serious business at Fuchun Secondary School, where dance is a niche programme.

With five seconds to go, students and teachers got back up on their feet, ready to swing and swirl their way into a new record.

Yesterday, 234 students from Secondary 1 to 3 and teachers from the school jiggled and jived their way into the Singapore Book Of Records for the longest duration of zumba, a dance fitness routine.

All told, they put in a four- hour-long session to mark the school's 30th anniversary.

"Towards the end, all I was thinking was to keep going, it's just one more song," said Secondary 3 student Muhd Harun, 15.

The participants were allowed five minutes' rest after about every hour.

A group of teachers and students led from the stage as they moved to beats from artistes such as Usher, Chris Brown and the Vengaboys.

"This gets us moving rather than being in a boring classroom for four hours," said Secondary 3 student Deshantini Paneerchalvan, 15.

The school, which has a Lifelong Learning Programme (LLP) in dance, had its work cut out once it decided on this anniversary move.

"We thought that dance is the way to go because we ride on dance as a platform in our school," said Madam Rohizan Talib, the school staff developer.

"But just like preparing for a marathon, we had to prepare and condition ourselves."

Preparations started in March, when the teachers and a dance vendor worked together on the choreography.

The teachers then rolled out a video in June with the steps for the dance marathon.

The actual routine was two minutes long, but performed over and over, about 120 times, said Madam Rohizan.

A month later, the students, who were mainly from performing arts co-curricular activity groups, started practising.

"The students like it because it is easy to pick up," said Ms Hafiza Yahya, subject head of Aesthetics at the school.

"Even during their school camp in August, we saw that the dance had grown on them. When familiar songs were played at the campsite, they all started dancing."

On the big day, dressed in colourful quick-dry gear, and sporting streamers from their wrists, the participants achieved their goal.

"I am so relieved and proud of what we did," said Harun, who is a member of the Malay dance club. "I was shocked that I could last for so long."