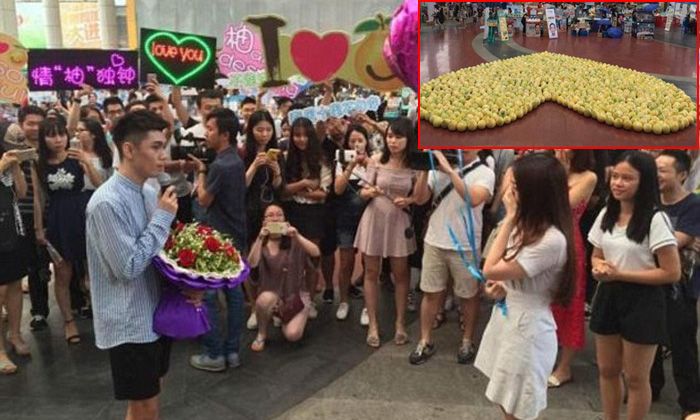 A college student in Guangzhou, China, decided to publicly declare his affections to his crush -- with 999 pomelos.

According to globaltimes.cn, the poor guy was turned down by the girl known as "Mumu", after his elaborate display of singing, dancing  and giant custom-made banners at a local shopping mall on Sep 4.

The two met during orientation at university.

"My goddess"s favourite fruit is pomelo. So I bought 999 pomelos for her to express my love. I love you..." he said.

He also had 999 love letters with notes saying "the pomelos contain my love for you" and "I will always love you."

He then announced, "I have always liked you since I knew you. Can you be my girlfriend?"

Mumu replied, "I do not like you. I have always seen you as my best friend but you can leave the pomelos."

In a bid to break the tension, one of Mumu's friends grabbed the mic and said, "Hey! Mumu said everyone can take some pomelos."

The crowds including staff from nearby shops rushed to grab the pomelos with some even taking five.

I guess you can say his attempts were not fruitful.

Related Stories
Wealthy Shanghai couple shuts down entire road for wedding and causes traffic jam
Dutchman flies to China and waits 10 days at airport for online GF who never showed up... because she was getting plastic surgery
Shaanxi woman divorces paralysed husband and marries his friend -- but it's not what you think
More About:
China
couple
proposal
love
heartbreaking