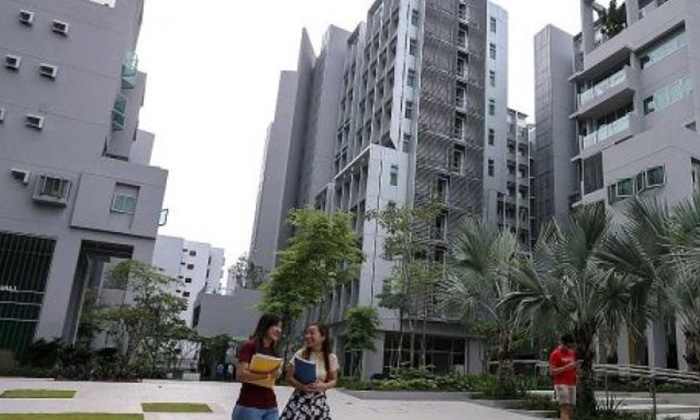 The second-year mechanical engineering student said "It used to take me 1½ hours to travel from my home in Aljunied to school. Now it takes just 15 minutes to walk to class."

This is thanks to NTU's three new student residential halls at North Hill, at the university's entrance at Jalan Bahar.

Mr Lim, 23, told The New Paper : "I like staying here as it is a fresh experience... it's very green and breezy because of the environmentally-friendly features.

"All my friends are here and I get to bond with the people on my floor over study nights and block dinners."

What is interesting is that all the rooms, including its interior features such as lighting, windows and fans, were built at a factory, and then put together on-site - like Lego bricks.

Each hall is named after an NTU heritage tree: Banyan, Binjai and Tanjong.

Mr Lim stays in a twin-sharing room at Binjai Hall.

Designed by P & T Consultants, it is equipped with environmentally-friendly features such as energy-saving LED lights and solar cells for power.

The buildings are positioned to catch the wind, reducing the need for air-conditioning.

Each room has a louvered ventilation panel, allowing wind to flow through without having to leave doors or windows open.

All windows are double-glazed, reducing heat transmission, and have louvres that shield the interior from the sun.

To use air-conditioning, students have to pay for it using a top-up system at the bottom of each block.

Mr Ahman Farid, 24, an electrical engineering student who stays in a twin-sharing room in Binjai Hall,was pleased with this system.

He said: "We can just top up whenever we need to use it. This saves a lot of electricity."

Apart from reveling the futuristic exterior, students are already making efforts to bond with their hall-mates.

Mr Lim volunteered to be vice-president of Binjai Hall because he wants to be involved in campus life. He handles complaints from the student body, organises block dinners and study nights to bond the community.

He told The New Paper: "I believe this is a place where I can influence and shape the hall.

"Students who stay here will be enriched with different programmes and activities unique to  our hall and can extend their network of friends."