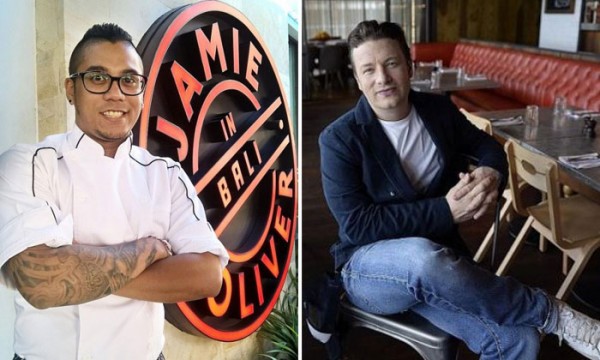 He dropped out of school twice.

The restaurant is a branch of English celebrity chef Jamie Oliver's restaurant chain.

The 27-year-old bachelor told The New Paper in a phone interview from Bali: "It has been my dream since I had the passion to be a cook (when I was 17) to be the head chef at a celebrity chef's restaurant."

In April this year, Mr Gary Clarke, executive chef of culinary operations and development for Jamie's Italian in South-east Asia, told Mr Rezel that he would be promoted from sous chef to head chef in June.

The head chef oversees all kitchen operations and the sous chef is his second in command.

On hearing the good news, Mr Rezel recalled: "I said, 'No way, really?' I was really happy."

But long before achieving success, he was a failure in school.

He studied retail management at ITE College East, but dropped out after his first year.

He said his Chinese Singaporean mother, 57, and Eurasian father, 55, who both worked in banks, were "slightly upset", but were also "very encouraging in giving me the freedom to choose my career and life".

It was during his basic military training in national service that his passion for cooking was ignited.

His platoon mate Alex Phan, who is now a chef at Restaurant Ember, gave him a cookbook to read.

Mr Rezel said: "I was hooked. It had so many interesting things about cooking that I never realised before."

He had already been cooking for years at that point. When he was eight, he started helping his mother and grandmother in the kitchen, but viewed it more as a bonding activity.

At 16, he worked as a waiter at Bliss Restaurant and would volunteer to take over simple kitchen tasks like cutting vegetables when the cook was absent.

After NS, he enrolled in Shatec for a two-year culinary course and graduated in 2010 as one of the top 10 students in his cohort.

With encouragement from friends, Mr Rezel gave studies another shot and enrolled in Kaplan Singapore in 2012 for a course in marketing and management.

But the pull of the kitchen was too strong.

He said: "I told my parents... that I really, really wanted to cook, I've found what I really love. My mum said, 'Go for it, but make sure you become the best'."

So he dropped out of school in 2013 to apply for a cooking position at Jamie's Italian Singapore, which had not yet opened.

By then, Mr Rezel had cooked at restaurants such as Ricciotti, Garibaldi, Zet's Creation and Etna.

He recalled how he'd missed the interview dates for Jamie's Italian Singapore because of his busy schedule.

Undeterred, he took his resume to the restaurant's main office and waited outside the door for four hours until then-sous chef Alex Barman returned and agreed to interview him.

Mr Rezel met Mr Clarke, the executive chef, the next day and was hired as a junior sous chef.

In late 2014, he was offered the position of sous chef at Jamie's Italian Kuta Beach, but it took him a month to decide before accepting the gig.

"A lot of things went through my mind, (leaving) my family and friends, they mean a lot to me. But it was also an opportunity to advance my career."

With encouragement from his family, he accepted the position and moved to Baliin March last year.

On his new appointment, he said his mother was "extremely happy".

"She said, 'You finally got it! You got your dream!'" said Mr Rezel, who returns to Singapore every few months.

He admitted he was intimidated by the new responsibilities.

"I started to doubt myself. I thought, 'Am I ready for this? Can I actually manage 37 cooks in the kitchen?'"

Looking back, Mr Rezel attributes his success to his parents' support and the desire to silence acquaintances who said he would not succeed without a degree.

"The more people said that, the more I wanted to show them that I could," said Mr Rezel, who has not ruled out the possibility of returning to school.

"I'm sure having a degree would help you a lot, but this is proof that if you work hard, take chances, go for your dreams and do what you love, you can achieve it.

"It's not about holding a piece of paper."

I told my parents... that I really, really wanted to cook, I've found what I really love. My mum said, 'Go for it, but make sure you become the best'.