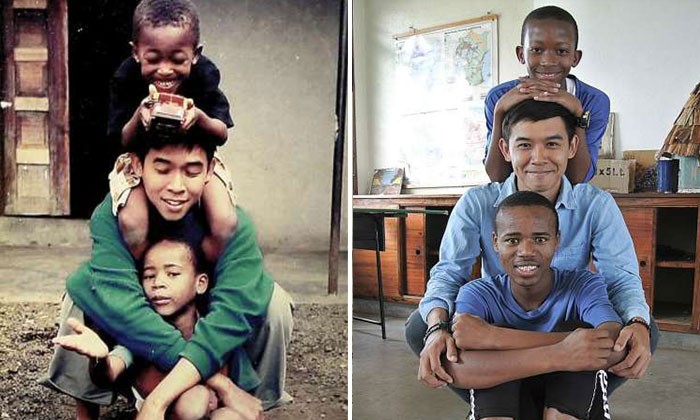 When Singaporean film-maker Mak Chun Kit returned to the Tanzanian orphanage last year where he had volunteered as an English teacher a decade ago, he was upset to discover that none of his orphan friends had managed to turn their lives around.

All of them were still struggling in poverty. One named John had apparently even grown up to be a drug addict and thug. Mak was warned by others to stay away from him.

But Mak, who is single, was determined to see how his old friend was doing and when he reunited with John, now 21, the so-called thug broke down.

Mak, 38, says: "John is this big, macho guy, but when he saw me, he came up to me and cried on my shoulders for 15 minutes. I was heartbroken. Then and there, I decided to do something to help him and my other friends."

That something is his latest documentary project, Buying Happiness. He is raising money for the orphans to use towards making a decent living. After the money is disbursed to them, he films the result of how they are using the donations.

His Indiegogo campaign for the project launches today. It is his second online fund-raiser.

In May this year, he had run a 45-day crowdfunding campaign which raised close to US$40,000 (S$56,540). Much of those funds has already gone to the orphans to kick-start their ambitions.

In Singapore, two restaurants are also holding fund-raising events for the project later this month: Timbre @ The Substation will screen new footage from the shoot and conduct a Q&A session with Mak on Wednesday; and SPRMRKT Kitchen & Bar has designed a dinner menu starting on Nov 25; partial proceeds will go towards the production.

Mak personally handles all donation funds, which will first go to the orphans' projects, then to cover the cost of production.

He says optimistically: "The little that we've given the orphans so far has already led to some big and positive changes. My fear is whether it's all sustainable, but I expect things will go very well for them, at least in the short term."

Beyond featuring nine orphans, whose lives will be documented over four years, Mak, through Buying Happiness, will also ask the question of whether donations indeed impact the lives of the poor.

Speaking to The Straits Times over the telephone from Mexico City where he is based for another project, he says: "There is this cliche of the African orphan and there have been charity scandals where orphans are used as donation bait. So people have this belief that one should not give the poor cash as they would probably squander it or become dependent on aid.

"But I strongly believe that there are pivotal moments in our lives when all we need is a little help, such as a little financial assistance, to turn things around."

With the first round of funds, an orphan named Jackie, 23, got the charcoal oven she needed to start her baking business, while another named Happiness, 21, could finally buy a sewing machine and rent a shop space where she will make and sell embroidered pillow cases.

Rama, a mechanic, purchased a second-hand motorbike using the donation money. The 25-year-old now rides the bike to and from work, sparing him the three-hour walk each way.

Mak says with a chuckle: "I interviewed and filmed Rama about three weeks after he got the bike and he told me that everyone is teasing him now because he finally has cheeks on his face."

In 2014, he released Little People Big Dreams, which looks at the plight of employees at a Chinese theme park called Dwarf Empire, where little people put on costumes and dance for visitors. The film was named Best Social Awareness Programme at last year's Asian Television Awards.

Mak, who also takes on commercial gigs on the side, says: "I've always been drawn to communities whose voices are seldom heard in the media. They offer powerful stories that reflect important issues facing society."

After graduating from Nanyang Technological University with a bachelor's degree in TV and radio broadcasting, he wanted to explore the world in a different way and ended up teaching English as a volunteer at an orphanage in the Tanzanian city of Arusha in 2004.

"Up until then, I had backpacked quite a bit, but I was looking for something that could provide more depth to my travels. I didn't want a fleeting, superficial experience.

"So I searched for opportunities online and the offer to volunteer at an orphanage without any running water or electricity couldn't have sounded sweeter. I wasn't exactly a kids' kind of guy, so I wasn't sure how I would fare, but I was up for the challenge."

In his four months there, he befriended and mentored orphans aged four to 21. He was like their "first big brother figure" as he was the orphanage's first male volunteer.

After he left, he kept in touch sporadically via e-mail with the eldest, Daniel, 33, before returning last year.

"The follow-up to something like a romantic volunteer stint is not something people spend much time thinking about, much like the fate of fairy-tale couples after they go off into the sunset.

"So I wanted to go back and see how they were doing and it was indescribable seeing them again."

•To support Buying Happiness, go to www.indiegogo.com/at/buyinghappinessfilm or visit the official Facebook page.