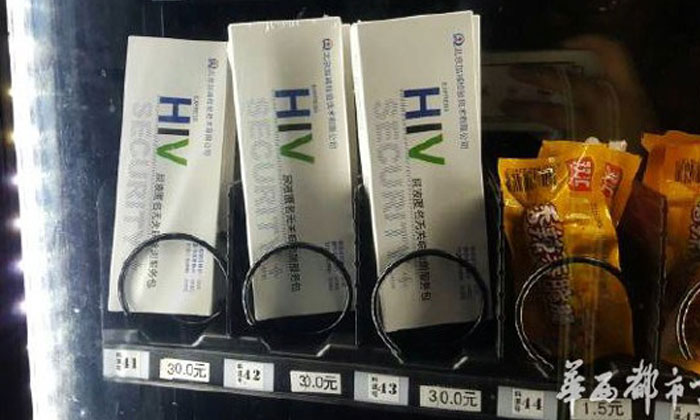 To address the Chinese government's urgency of curbing the rapid rise of HIV infections among China's youth, a technical university in the Sichuan province has set up a rather unusual vending machine, reports Shanghaiist.

One that offers cheap HIV tests.

The picture of the unusual vending machine found at Southwest Petroleum University was posted by a Weibo user, and featured a kit priced at 30RMB ($4.75) -- which is indeed very inexpensive when compared to its market price of 268 - 298RMB($40-45), reported What's on Weibo.

Part of a new program by China's STD & HIV Prevention Association, the sale of these kits targets schools and colleges, where HIV infections have recently become more prevalent.

Though the number of people living with HIV/AIDS in China is over half a million, it makes up only less than .037% of the total population, states a 2015 report by UNAIDS. However, the number of people with the disease continues to rise, with roughly 200,000 new cases reported between 2010 and 2014.

Interestingly, the group that is most affected by the growing epidemic are young gay men from high schools and colleges. According to the site, the increase of infection cases from unprotected sex might have been due to the continued stigma against homosexuality and the lack of quality sex education in schools. And the results have been rather alarming. Colleges in the city of Nanchang saw infections rise by 43% annually with over 80% of new cases resulting from same-sex encounters, over a five-year period.

The vending machine experiment by Sichuan is one of several initiatives organised by both activists and government officials to raise awareness and combat the stigma surrounding HIV/AIDS in China.

However, HIV advocacy is not solely limited to the provincial and grassroots level. During the G20 summit in Hangzou earlier this year, Chinese First Lady Peng Liyuan promoted the prevention of HIV/AIDS at Zhejiang University's campus event, calling on other countries to help search for a cure and curb the spread of the disease. Peng Liyuan is also a World Health Association ambassador for tuberculosis and HIV/AIDS, as well as an anti-HIV/AIDS publicist for China's National Health and Family Planning Commission.

The spread of HIV continues to be a serious concern for the country even as the Communist Party's Sixth Plenum kicks off in Beijing. With more people at risk, impartiality towards social taboos and urgent implementation should be the government's key objectives when tackling this potent public health problem.

Which probably means we'll be seeing more of such vending machines in China.

Related Stories
A look inside the only school in China that's just for children with HIV
Chinese man misdiagnosed with HIV 'lived in hell' for 12 years: 'My entire life is destroyed'
Want extra points on your school entrance exams in China? Just get your parents to invest $5 million
unusual sight
China
HIV
AIDS
sex life
safe sex
youths
university
school