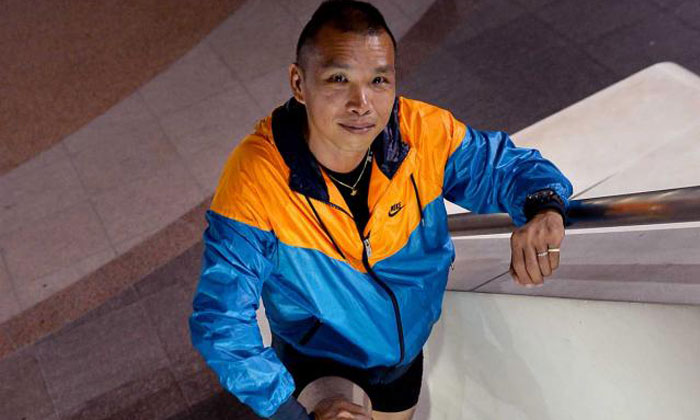 They could not pay the bills, so their utilities were cut off.

And the mother and her three boys "had to do their business" in plastic bags.

"My father not only had a gambling problem, he was also a drinker. Often we didn't have enough money for electricity, water or food," said prison warden Bruce Tong, 41.

"We used to 'steal' electricity by tapping into the mains outside the flat but after they locked the door to the mains, we studied using candles or light from outside," he said.

Mr Tong and his two younger brothers used to get 20 cents a day each. Bus fare was 10 cents to school and 10 cents back, so hunger was a constant companion.

"When I had a dollar I would spend it buying three loaves of jiam tao lo tee (Hokkien for baguette). I would eat one for breakfast, one for lunch and one for dinner," he said.

His hunger made it hard for him to focus on schoolwork and Mr Tong ended up in the monolingual stream, where he had to do eight years of primary education before moving on to a vocational institute.

"You could say I was a late bloomer who lost the opportunity to make something of myself. My father would often pour cold water over my ambitions, telling me I could (be) a road sweeper," he said.

Not wanting those words to come true, Mr Tong decided to buckle down and study.

To make money for school fees, he took on several part-time jobs since the age of 13.

"I helped out at the vegetable stall in the wet market and was paid $10 a day. Then I worked in buffet catering, and at fast-food restaurants.

"I even helped dispose of garbage. It was hard work but I was determined to get an education," he said.

At the vocational institute, Mr Tong learnt that his principal had been a school dropout.

"But he returned to school, went through polytechnic and university and became a principal. He was an inspiration to me," he said.

And Mr Tong, who has worked with the Singapore Prison Service for the last 18 years, was eventually awarded a gold National Youth Achievement Award (NYAA), a scheme funded by Tote Board

Wanting to give back to his alma mater, he runs the million-metre race yearly, jointly organised by NYAA, Gold Award Holders' Alumni and ITE, to raise funds for the ITE Endowment Fund, which provides assistance to financially disadvantaged students, so they can focus on learning at ITE.

He took the job as a prison warden so he could work with people on "the wrong path".

"I want to help turn them onto the right one," he said.

He also gives talks at the Singapore Boys' Home, run by the Ministry of Social and Family Development.

It houses about 380 youths, whose offences include theft, rioting or molestation, or are judged to be beyond parental control.

"They are all good boys who were led astray or had negativity flung at them throughout their lives.

"With the right direction, I believe they can be led onto the right path. I always relate my own story when I speak to them," Mr Tong said.

His son, Alfred, was born a month ago. His wife has stopped working to take care of him, and Mr Tong said he will be a hands-on dad.

"I am going to impress upon him that he is someone who will be a useful member of the community and has to do his best in everything he sets his mind on," he said.