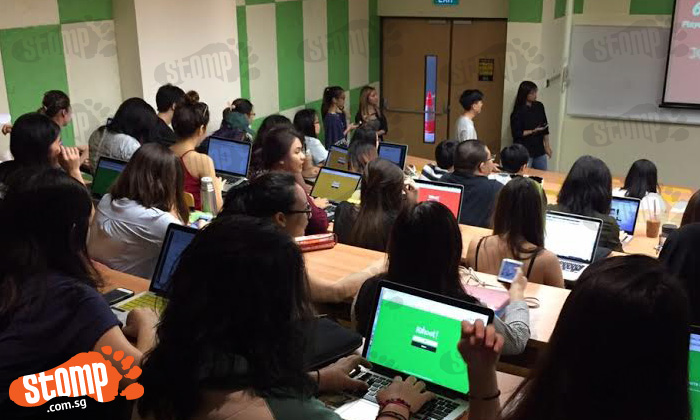 Poly students shared an interesting campaign 'Ken You Do It' by their peers, and the fun lesson that came along with it.

Stompers chloe_ongzx97 and digimontaiki23, who is a Ngee Ann Polytechnic year 1 student, shared their interesting 9am class with Youthphoria on Jul 19.

According chloe_ongzx97, a group of Advertising and Public Relations Diploma students promoting their campaign called 'Ken You Do It?''.

"From what they said, their campaign is about a student named Ken. He’s a guy that cares a lot about his image and his social media life.

"So their campaign aims to get Ken to rediscover the civic mindedness in him through a mobile app called One Service. Their lecture crash was really engaging and fun."

"They made the talk very fun because they played a game called 'Kahoot'. All the students in the lecture theatre had to sign in to the game using our phones or laptops, then we had to answer questions about municipal issues under ten seconds.

"It was fun because some of the options were quite funny and something us as students can relate to.

"For example, when asked, 'What can one do when he sees a cockroach infestation at the Deck (a place in Ngee Ann)?'

"Some of the answers were 'talk to the cockroach and ask it to go away' and 'Snapchat it'. However, the correct answer was snap it and submit it through the One Service App.

"Apparently this app is a way to report municipal issues in Singapore.

"After the game, they had the winner of the game to dance with Ken and some other students to 'Work' by Rihanna. The students also brought props like an umbrella, fake flowers to make it more entertaining.

"I think it was quite refreshing to see something like this happening in my lectures, where students are promoting a campaign for a good cause to help the community."

'The peak of excitement during their publicity stunt was when they invited the winner of the Kahoot game and some other students chosen at random to challenge off in a lip sync battle with Ken.

"They lip-synced to popular Korean band, Big Bang’s notorious song Bang Bang Bang. Many of the students in the lecture theatre has a good laugh and were Snapchatting their friend dancing."

Ken You Do It

This campaign is to address the issue of youth being hesitant to unleash the good in themselves due to peer pressure and other social reasons.