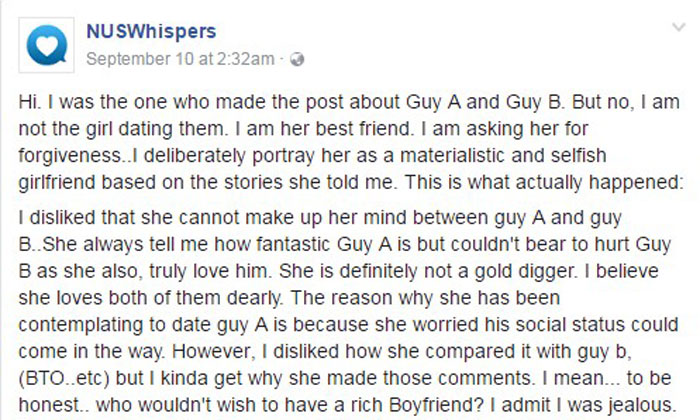 A National University of Singapore (NUS) student's post on her dilemma over a rich guy chasing her and her boyfriend who is serving his National Service went viral on social media when netizens put her on blast for being a gold-digger.

The plot has thickened.

In a post on NUSWhispers' Facebook page, someone else has come forward as the best friend of the aforementioned girl.

It turns out that she was the one who posted the original post and deliberately portrayed her friend to be materialistic and selfish.

"I disliked that she cannot make up her mind between guy A and guy B.

"She always tell me how fantastic Guy A is but couldn't bear to hurt Guy B as she also, truly love him.

"She is definitely not a gold digger.

"I believe she loves both of them dearly.

"The reason why she has been contemplating to date guy A is because she worried his social status could come in the way."

She also admitted that she was jealous and wanted to ruin her friend's love life.

However, it turns out her plan failed because "guy B" grew closer to her and her own friendship with her best friend is now over when she found out about this.

I was shocked that she knew I was behind this. She told me she knew because I was the only one she tell her relationship problems to.... I didn't know I was such a special friend to her."

She lamented that if she could turn back time, she would never have posted the confession and took the opportunity to apologise.

Related Stories
Women confess the shocking secrets that they are hiding from their husbands
Ridiculous excuses that people give for cheating on their partners
Painful confessions on what it's like to lose the spark in a relationship
People confess to losing their virginity during one night stands
More About:
confession
cheat
cheating
youths
student
students
couple
facebook
NUS