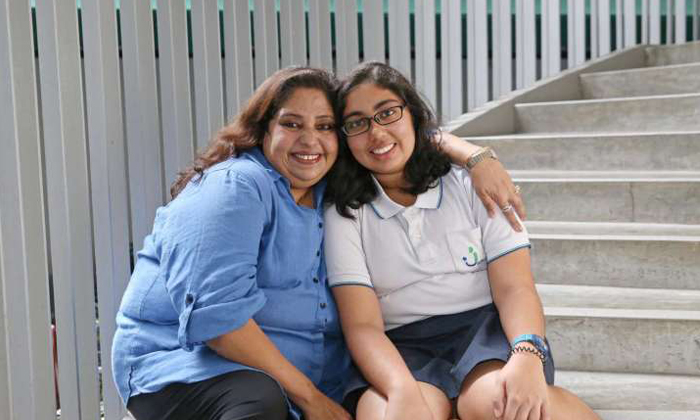 SINGAPORE - A diplomatic commemoration on Oct 21 turned out to be the perfect venue for student Aria Dutta, 17, to trot out her self-taught Japanese.

Aria became an unexpected star after the Pathlight School, which she attends, posted a video to its Facebook page showing Aria speaking in Japanese to Member of Parliament Denise Phua.

"All the Japanese people at the event were very surprised by my Japanese skills," Aria told The Straits Times proudly.

She and her fellow students from Pathlight, which educates children and youths with autism, were at Paragon Shopping Mall for the VIP opening of the SJ50 celebration of 50 years of Singapore-Japan diplomatic ties.

There, Aria had the opportunity to meet renowned Japanese calligrapher Shoko Kanazawa, who was performing and holding an exhibition of her works.

Ms Kanazawa, 31, uses calligraphy as a platform to show the public that artists with Down syndrome like herself can be as accomplished as - or more accomplished than - people without the condition.

Aria found herself inspired by the conversation with Ms Kanazawa and her 73-year-old mother Yasuko. "I would never be able to do kanji calligraphy like that," Aria enthused.

She was also thrilled by the opportunity to practise speaking Japanese, which she has been teaching herself for just under two years in order to understand the Japanese variety shows that she enjoys.

"This Japanese thing that everyone's talking about, I can take no credit for it," Aria's mother, Mrs Mousumi Dutta, 52, said frankly.

Mrs Dutta said she has promised her daughter that Aria can enrol in formal lessons after her N-level exams, which she recently completed.

Since she has been learning the language online rather than in a formal setting, she has struggled with mastering the writing system and grammar.

Aria picked up the foundations of the Japanese language on her own because she decided that she could not wait till then.

A deft multilinguist, Aria has previously studied Korean in the classroom. Besides English, she also speaks Bengali to her grandparents and knows a smattering of Hindi.

"Her language interest started with Korean," Mrs Dutta said. "You know how kids are. Their interest keeps on shifting."

Aria explained that her interest in East Asian languages came about after becoming a fan of K-pop music in Primary 6.

"Their songs are quite catchy," she said. "I wanted to know what their lyrics meant."

According to Mrs Dutta, Aria's natural ear for languages extends to music as well. Aria started singing "very early" and has been playing the guitar since the start of secondary school.

During the interview with The Straits Times, Mrs Dutta whipped out her phone and, like any proud mama, began playing a video of Aria recording an original song - even as Aria, like any teenager, covered her ears and cringed in self-effacing embarrassment.

Mrs Dutta, an economist by training, used to work in banking but became a housewife when Aria was diagnosed as being on the autism spectrum when she was two years old.

The Duttas have an older daughter, Airashi, 20, who is studying management and history in university.

"Aria's language learning experience is an excellent reflection of what self-driven 21st-century learners can achieve, with the right encouragement, motivation and learning resources," said Ms Phua, who is on the Pathlight school board.

Aria, who graduates from Pathlight this year, is currently taking Institute of Technical Education courses. Her father, who works in a multinational IT company, has been encouraging her to consider working in retail - an idea Aria finds intriguing.

But Aria also has other plans: "I would love to live in Japan and be a translator." She has been on two family trips to Japan, where she enjoyed the experience of interpreting for her parents, who do not speak fluent Japanese.

Mrs Dutta said that she hopes that Aria will find a way to use her diverse array of interests and talents to forge an independent future. She said: "She has these skills. How can we best utilise these skills and chart the next leg for her?"